Two-time All-American, Nick, demonstrates some basic tee work from several different placements and heights. This video is a great tool for players to use in the batting cage. If you have any questions or suggestions, feel free to contact us via JustBats.com Facebook or Twitter Page. E-mail: support@justbats.com Toll Free Telephone: 1-866-321-BATS (2287)

Hey, guys. Nick here with more hitting tips from JustBats.com. Today I'm gonna be going over some basic tee work. To kind of make tee work a little bit more involved and give you a better warm-up, what we're gonna want to do is move the tee from several different placements. All the way from the outside corner to the inside corner. And using a variety of heights to kind of work the entire strike zone. To start, what we're gonna do is start with the tee at a –set up at the outside corner and basically, at the bottom of the strike zone or as low as your tee goes. We're gonna start by hitting about 25 balls from this placement. And from here, you're basically going to be trying to –as a right-handed hitter, you're going to be wanting to hit the ball to right centerfield. After you finish your 25 hits from the first placement at the outside corner, you're gonna want to move the tee to the second placement, which is gonna be more right down the middle. When you move it to the middle, you do need to move the tee kind of at a 45-degree angle as you're moving forward because you are gonna contact that pitch a little bit further forward in the strike zone. One thing to definitely make sure you're doing, you want to stand at the same point that you're gonna stand during a game at the plate. So when you're hitting that outside pitch as compared to the middle pitch and then, eventually, the inside pitch, you're always gonna be wanting to stand in the same place. For me, I set up with the bat at the outside corner of the plate here. And I make sure my toe is right at the end of the bat. So I'm gonna be standing in the same place no matter where the pitch is at. So now I'm gonna demonstrate hitting a few from the middle. From this placement, you're gonna want to be hitting the ball up the middle to the left-center part of the field. For the final placement, we're gonna move the tee from the middle to the inside corner. Again, you're gonna want to be moving that tee at a 45-degree angle. That's because you're gonna be contacting this pitch a little further out in front of the strike zone. When you're hitting this pitch, you are gonna be wanting to hit it more to the pull side, but you still want to make sure that you're keeping your hands inside the ball. And when you hit this ball, that it's still gonna create backspin rather than hooking, a hooking effect, which is gonna cause you to pull a lot of balls foul. So that's kind of our main focus. And again, you're gonna want to make sure you're still the same distance away from the plate. After you've finished your 25 swings at those first 3 locations, you're gonna want to move the tee back to your outside location. And from here, you're gonna want to start practicing a variety of different pitch heights throughout the strike zone. So you're gonna want to raise the tee, you know, maybe half way up the strike zone. And then to the top of the strike zone. Again, practicing about the same amount of swings, 25 or so per location. And you're gonna want to do that same thing from in the middle. Again, a couple different heights. And then the inside. A couple different heights. At that point, you're gonna have covered the entire strike zone. And this is going to be a perfect warm-up before you get into any of your live-arm hitting. Just to make sure that you've kind of covered the field and worked through your entire swing. For more tips, go to JustBats.com. And remember to ask questions on our websites, as well as on our Twitter and Facebook. 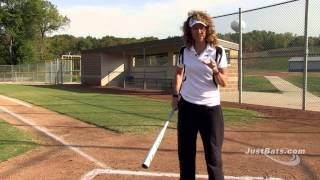 How to Swing a Fastpitch Bat Properly with Michele Smith 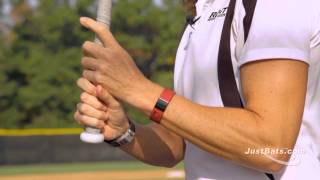 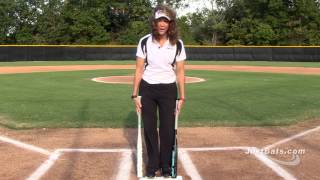 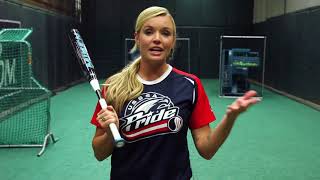