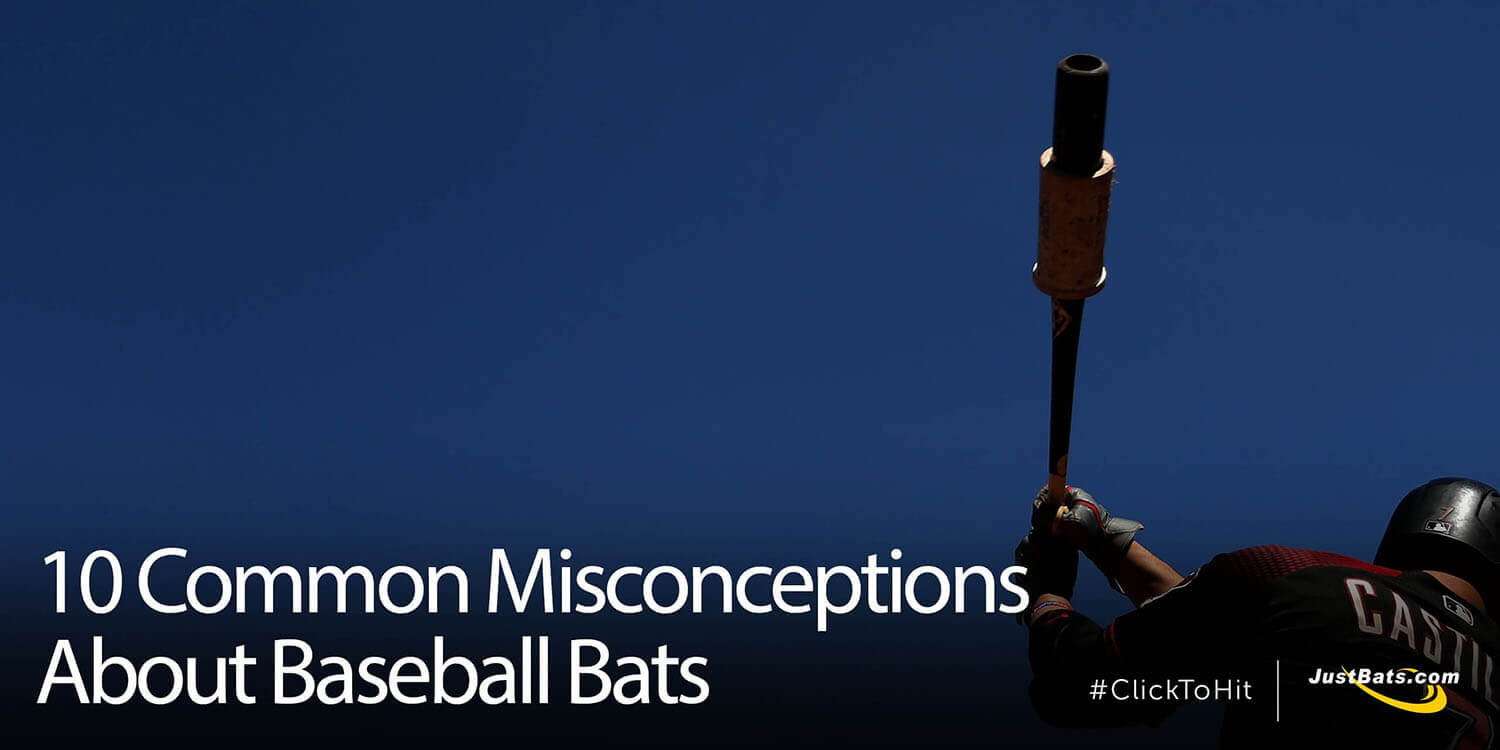 When the first official baseball bat was born in the summer of 1839, the journey it would take was as unpredictable as the sport it helped birth.

Baseball bats have undergone a series of changes, regulations, and transformations in the past 200 years. But change can bring misinformation. To help clear up the confusion, JustBats.com is here to dispell 10 common misconceptions about baseball bats.

If you have questions on baseball bats, here's some help with selecting a bat, as well as baseball bat care.

1) Ash is the most popular wood bat type

Ash wood bats are popular because they provide a large sweet spot and allows the wood to "flex" more. But ash has slowly decreased in popularity since Major League Baseball approved the first maple sanctioned model in 1997. With hitters preferring power, maple bats are the most popular wood bat type because they're stronger than ash (for example, Bryce Harper swings maple). Maple's hardness has surpassed ash's flexibility in popularity, and the result is more wood bat players swinging maple.

Easton often receives credit for the first metal bat because they introduced the first true aluminum bat in 1972. However, William Shroyer received a patent for a metal baseball bat in 1924. While metal bats were not prevalent in baseball games until the 1970s, Easton still wasn't the first bat manufacturer to introduce a metal bat to players. That honor belongs to Worth, who rolled out metal bats starting in 1970.

3) It's okay for wood bats to get wet

Wood bats are like mogwais from Gremlins; bad things happen when they're wet. There are plenty of valuable bat care tips, but the reason wood baseball bats should avoid water is that they absorb unnecessary weight from the water. It's why Ichiro Suzuki keeps his bats in a humidor or why Rod Carew kept his in sawdust. Wood bats have pores and water can easily seep into these pores. For this reason, more players "bone" their bats with hard objects to close these pores and protect their bats from water and other harmful elements.

Double-wall design wouldn't have happened without the successful introduction of scandium-aluminum bats in the 1990s. Scandium is a mineral that increases the strength and resilience of aluminum without adding to the weight, so bat manufacturers started alloying scandium with aluminum. The use of scandium set the stage for other metal bat enhancements. And, since most high-quality metal bats are now made from scandium-aluminum alloy, it's introduction is considered a better bat invention than even double-wall design.

5) Cupped end on a wood bat makes the bat weaker

The exact opposite. A cupped end's main advantage is that it allows a manufacturer, such as Louisville Slugger or  Marucci, to use a more dense piece of wood during construction. Denser wood makes the bat harder and minimizes potential breakage. Read more about the advantages of a cupped end on a wood bat.

6) The hands are considered part of the bat

This is a misconception due to different interpretations of the rule. Little League rule 6.05 (e) states: a batter is out when the batter attempts to hit a third strike and is touched by the ball. So, a common misunderstanding is that hands are part of the bat. But, that's not true. Hands are part of a person's body. If a pitch hits the batter's hands, the ball is dead. Now, if he/she swung at the pitch, a strike is called even if it hit the batter's hands (note, it's not ruled a foul). If the batter was avoiding the pitch and it hit their hands, the batter would be awarded first base.

Because of how dense and hard maple bats are, some believe when maple bats break they fly further, thus maximizing potential harm. While maple bats are, indeed, heavier, that extra weight also decreases the chances of breakage. So, maple bats aren't any more dangerous than an alloy bat or birch wood bat.

9) Louisville Slugger provides the most bats to MLB

For 120 years Louisville Slugger manufactured more bats for Major League Baseball than any other bat manufacturer. But, in 2014, Marucci took over the top spot. Players from Jose Bautista to Albert Pujols to Bryce Harper to David Ortiz have swung Marucci, and with a strong player relationship, Marucci isn't going anywhere. In 2006, Marucci owned 4% of the MLB market, but that number is now more than 40%. Louisville Slugger bats are still extremely popular in MLB; just not the most popular.

BBCOR was implemented in 2011 as the new bat standard for high school and college players. The goal was to increase player safety and make the bats more wood-like. There was some backlash among a contingent of players and parents, which is why the 'BBCOR killed baseball' claim still exists. However, according to the National Federation of High School Associations, 473,503 high school students participated in baseball in 2010-11. That number grew to 492,935 in 2016-17.

Which baseball bat misconceptions did we miss? Please leave it in the comments section below. Don't forget, if you ever have any baseball bat related questions, reach out to our friendly Bat Experts at 866-321-2287, email at  experts@justbats.com, or you can click here to live chat. Remember, we'll be here for you from click to hit!

Filed Under: Baseball Bats
Chat Us
You can compare a maximum of four items.
Please remove one item to add another.
Add up to 4 items to compare.
Show Comparison
ERRR