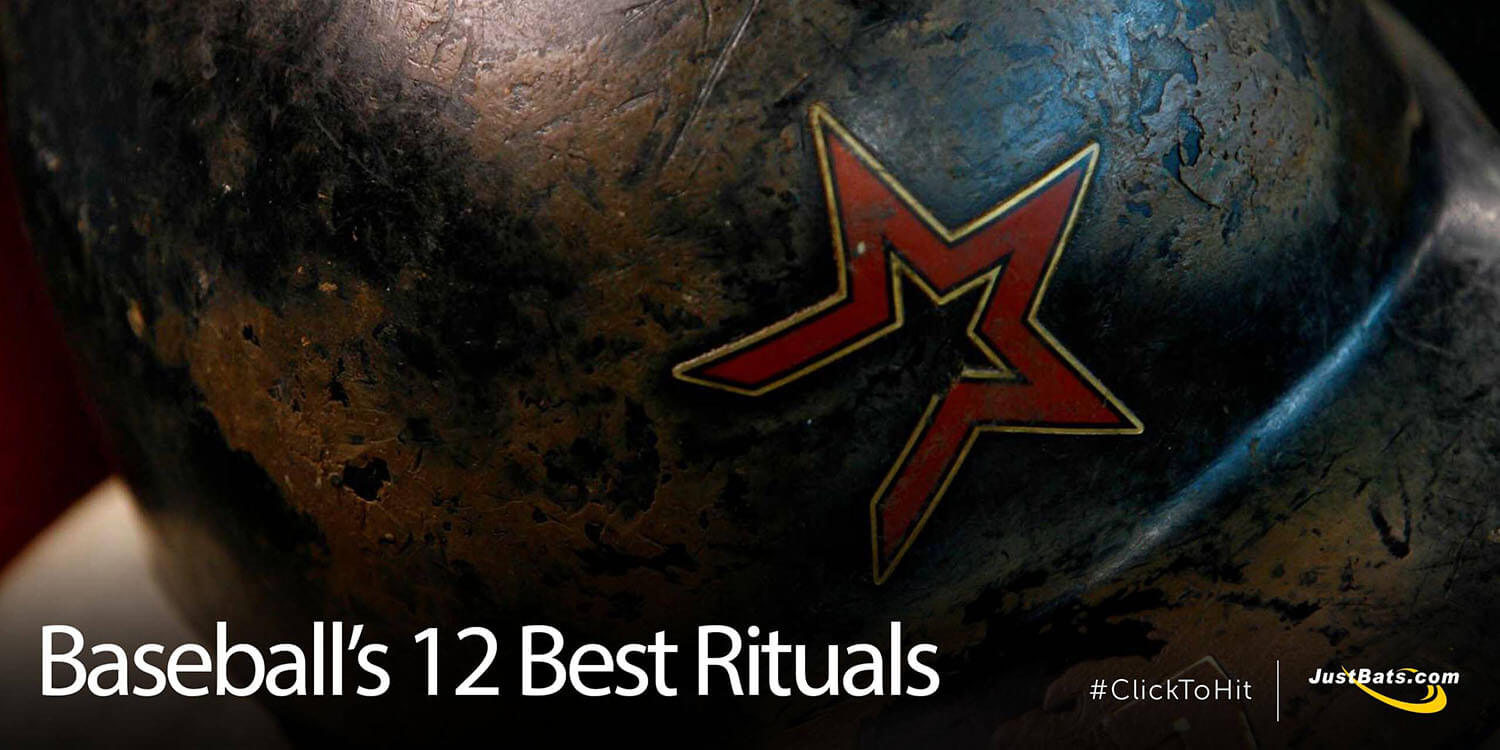 Most athletes, if not all, are superstitious to some extent. Baseball players tend to be the most superstitious.

Baseball's rituals and routines are odd, quirky, and even crazy. But, if they help with mental preparation before a game on the biggest stage or the next at bat then they must have some value, right?

The team at JustBats loves baseball, and we watch a lot of games. Through hours upon hours of innings, we've compiled the 12 best pre-game and in-game mannerisms that make up this epic list of baseball rituals.

When it comes to these strange baseball rituals and routines, some players will perform them over their entire career without fail. It is who they are and has become a part of their day-to-day. Others will only continue these semi-silly acts as long as they are at the top of their game. Once they start to fall into a funk, it's time to move on and find a new ritual.

Easily the most recognizable baseball rituals of all-time are the ones that happen in the batter's box. All players have their own at-bat routine, but the most widely known at-bat ritual belongs to Nomar Garciaparra. His relentless unstrapping and re-strapping of his batting gloves drove people insane. Afterward, he would touch the end of his bat, do a little toe tap dance, and then finish by swinging his bat round and round. With a .313 batting average over his entire career, Nomar must have been doing something right. 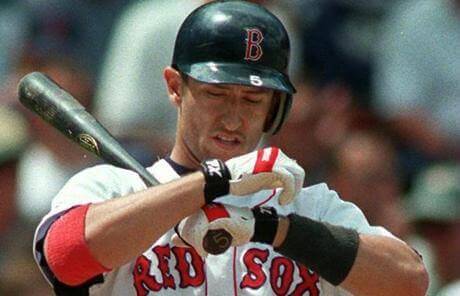 Batting stances are like snowflakes: no two are equally alike. Hitting is full of risk and uncertainty so players tend to keep things constant once they find what works. Fundamentals can be taught, but once a player finds something that works they're going to stick with it no matter how odd it may or may not look; such as Kevin Youkilis, Ichiro Suzuki, and Jeff Bagwell. 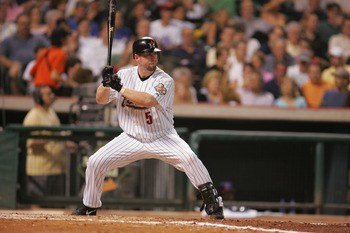 Take Me Out To The Ball Game

Do we have any singers out there? If you've ever been to a baseball game, you know that the 7th inning stretch turns into a sing along. The song Take Me Out To The Ball Game, American baseball's unofficial anthem, has been an inconic baseball ritual that almost every baseball fan can recite. As you can see, the lyrics are fun and easy to belt out at your favorite ballpark:

Take me out to the ball game
Take me out with the crowd
Buy me some peanuts and crackerjacks
I don't care if I never get back
Let me root, root, root
For the home team
If they don't win it's a shame
Aahh.
For it's one,
Two,
Three strikes you're out
At the old ball game

All I need is just one chance
I could hit a home run
There isn't anyone else like me
Maybe I'll go down in history
And it's root, root, root
For the home team
Here comes fortune and fame
'Cause I know
That
I'll be the star
At the old
Ball
Game

The ceremonial first pitch has been a timeless ritual that dates back to at least 1890. Celebrities, heroes, and even Presidents of the United States have had the honor of throwing out the first pitch before a Major League game. Some of the more memorable first pitches are due to either the circumstances at-hand or the horrendous performance by the thrower. For the latter, the worst first pitches include 50 Cent's southpaw pitch, Miss Texas's underhand fiasco, and Mariah Carey's high heeled heave.

Most of the time, the first pitch ends with a strike right down the middle followed by an epic roar of the crowd. This ritual not only gets the crowd involved in the pre-game festivities, but it kicks off the beginning of every game. Baseball wouldn't be what it is today without this timeless ritual.

Believe it or not, eating the same meal before every game is quite common. The odd part about this ritual is the type of food that certain players consume. If you've ever been to a weekend travel ball tournament, there's a great chance you've had Subway for a pre-game meal.

Wade Boggs famously ate fried chicken before every game. Derek Holland was known to overindulge on Taco Bell the night before a start. Even more, the 1894 Baltimore Orioles ended their season with the National League pennant by winning 24 of their final 25 games and they attributed it to their good luck charm: gravy.

As a team, everyone was required to drink a glass of turkey gravy before batting practice each day. Drinking together can definitely be a great team bonding ritual, but gravy is not typically the drink of choice. With six Hall of Famers on the squad that all hit over .300 for the season, maybe gravy is the key to success.

What is the reason behind your jersey number? Is there some symbolism or ritual behind the number on your back? Is it the lucky number seven? Maybe it's a favorite number or your date of birth.

For example, former NL MVP Larry Walker wore the number 33, because of his fasicination (or, obsessive compulsion) with the number 3. Walker did everything in multiples of three or in relation to the number three. He woke up 33 minutes past the hour, took batting practice in reps of three, and even got married on November 3rd at 3:33PM. The creepy part? Things didn't work out as planned and Walker divorced his wife three years later which resulted in a...yep...$3 million dollar setllement.

Walker even once purchased 33 tickets for under-priviledged kids to sit in section 333 at Olympic Stadium when he played in Montreal for the Expos. This baseball ritual was taken to a whole different level in comparison to some others. 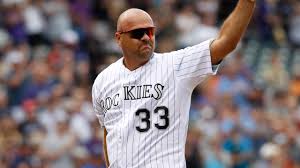 We've all seen it. A team full of beards heading into the playoffs. Hockey players may have been the originators of playoff beards, but baseball players perfected the ritual. It makes sense having a beard in October when chilly weather is more common. Plus, it's considered bad luck if you shave going in to your first round matchup. Some of the best playoff beards in recent history include the beards of beantown from 2013 and beard mania from the San Francisco Giants. 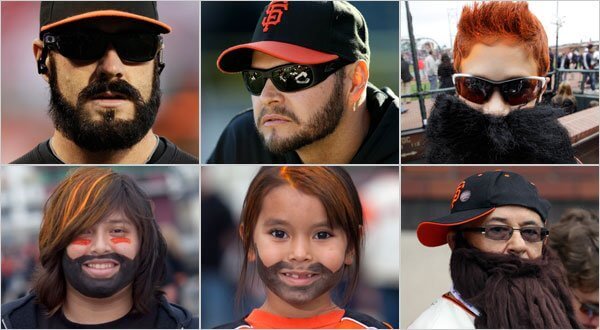 Sleeping With Your Bat

"You've got to become one with your bat."

"If you treat it right, it'll treat you right."

We've heard it all. More commonly, people sleep with a bat nearby as a form of self defense, not to help get them out of an unfortunate hitting slump. Having a baseball bat in the bedroom has been done by players of all ages, with varying degrees of success. There may be no science behind the effectiveness of this ritual, but if taking your bat to bed with you helps you perform at the plate then by all means sleep tight.

World Series winning mangaer Jim Leyland has indulged in the ritual of refusing to wash. Don't worry, he continued to take showers and bathe but news broke that he refused to wash his underwear during a 12 game win-streak back in 2011. Not only did he refuse to wash them but he refused to change his underwear.

On a less severe note, stories of refusing to wash batting helmets, batting gloves, and of course baseball caps are much more common than a pair of underwear. Have you ever seen the disgusting white sweat outline on a player's cap? Don't even bother asking them to wash it because it's likely they are experiencing some success and don't want to change anything. Craig Biggio, former MLB second baseman, was famously known for never cleaning his batting helmet despite season after season of dirt and pine tar build up. 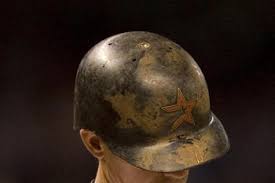 Drawing In The Dirt

Wade Boggs, former MLB infielder, would always crouch down and draw in the dirt before each at bat. Apparently, he would draw the Hebrew symbol meaning "life" and when he was asked about it he never explained why he did it. This is just one of the many mysteries behind baseball's rituals. While many players have since employed this artistic ritual, Boggs is said to be the originator. More recently, Pablo Sandoval (aka Kung Fu Panda), draws a cross in the dirt with the knob of his bat before stepping into the box. He then proceeds to jump in front of the box and touch the barrel of his bat with his feet. Pablo does this in rememberance of his late grandmother, grandfather, and sister.

Peeing On Your Hands

That's right. Baseball players have been known to ritualistically pee on their hands during a baseball season and it is said to have all started with MLB outfielder Moises Alou. Most players simply wear batting gloves to reduce the vibration and sting in their hands during contact but not Moises. He pees on his hands. While this is extremely unsanitary, Alou stated that it helped him avoid calluses and hardened his skin. Jorge Posada, an MLB catcher, also participated in this more gross than helpful tactic because he claimed it toughened his hands up and aided him in his gloveless technique behind home plate. This has since been dubunked as urine contains urea which is a major component in moisturizing creams. So, please, do not pee on your hands.

One of baseball's claim to fame is their rain delay games. According to reference.com, a rain delay must last 30 minutes before an umpire may cancel a game. That gives players 29 minutes to entertain themselves in any way they choose. Whether they want to turn the infield tarp into a slip 'n slide or have a potentially dangerous game of jousting is entirely up to them. We don't care how they decide to pass the time, we're just happy for the show.

Did we leave any famous baseball rituals off this list? What is your personal or favorite routine when it comes to America's pastime? Leave a comment below and we will add to this list as new stories come about.

Or, if you have any baseball bat related questions, please feel free to reach out to our friendly Bat Experts via phone at 866-321-2287, email at experts@justbats.com, or click here to live chat! Don't forget, we're here for you from click to hit.