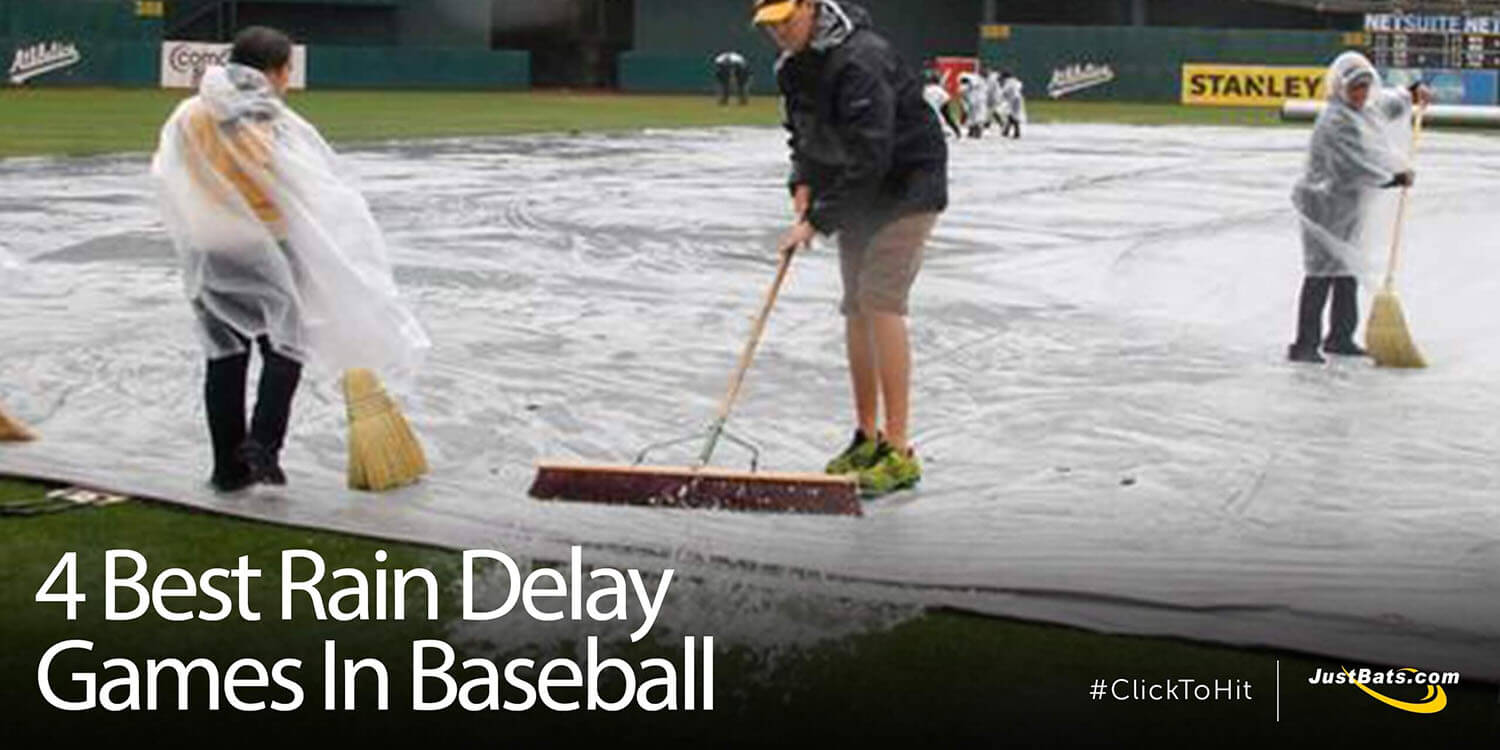 Have you ever had a day where it was hard to focus because you couldn’t wait for the game you had that night?

So, imagine you're at the ballpark, warmups are complete, and first pitch is right around the corner, and it hits, the torrential downpour from Mother Nature. Rain delay. Trust me, we have all been there. And while there are a number of ways to fill your time during a rain delay, JustBats.com collected the four (4) best ways ballplayers have entertained themselves during rain delay games.

A lengthy rain/lightning delay was on the horizon in Mississippi back in 2012, so instead of a baseball game to entertain the fans, these players thought outside-the-box.

Ole Miss started out rain delay with a human bowling alley act on the field that led to one of the players doing eight somersaults down the man-made alley, eventually knocking down ten of his teammates for a perfect strike. Not to be undone, Southern Mississippi countered with a spot-on human roller coaster re-enactment. Later, the teams combined for a priceless Baywatch skit, which included two players trying to swim on the tarp in the rain. Naturally, two players posing as lifeguards rushed down the stands with their trusty bat bags ready to save the drowning players in the “water." The delay antics ended with an epic dance-off.

When you're trying to win your first World Series title since 1908, it's difficult to associate rain delays with fun and games. The Chicago Cubs were a few outs away from winning the 2016 World Series when Indians' Rajai Davis hit a two-run homer to tie the game. Shortly after, a patch of rain and lightning hit Cleveland's Progressive Field causing a brief delay in the game.

Why is a baseball game nine innings?

During the delay, the Cubs Jason Heyward delivered a motivational speech in the visiting clubhouse. The speech was quick, as the delay only lasted 17 minutes, but it was one that worked to perfection. The Cubs took the lead in the 10th inning, and the Cubs went on to win that game and the World Series crown. Rain delays are usually an energy zapper for both teams, but the Cubs found a way to turn it into a positive.

This was a battle not only on the baseball field but on the tarp between two teams north of the United States. The Thunder Bay Bordercats faced off against the Rochester Honkers in Canada on July 4, 2012. As inclement weather threatened the area, the umpires delivered the unpopular rain delay signal. But that didn’t stop these players from still competing.

Once the tarp was set, the two baseball teams staged a hockey game. Players were using bats as sticks, helmets as goal posts, and the goalie was decked out in catcher’s gear. After the hockey game commenced, each team lined up in military formation, and the battle continued. The teams fired off baseball grenades at each other into enemy territory; all to the delight of the crowd that braved the weather conditions.

Who said big leaguers couldn’t have fun during rain delays too? A rainy afternoon in Chicago didn’t stop these MLB relievers from having a good time. Once the Wrigley Field infield was covered and the bullpens were moved inside the stadium confines, the party started.

Inside each bullpen is a monitor showing the opposing team’s bullpen. So the Cubs bullpen initiated a dance-off. What started with simple dance moves such as The Worm, grew when the Diamondbacks caught a glimpse of the screen and returned the challenge. Group dances, which included a bobsled and bowling re-enactment from the Diamondbacks and a fishing scene from the Cubs, entertained each team and the fans. In the end, the Diamondbacks had the last laugh after the Cubs flew the white flag in defeat. But, both teams gladly built their team chemistry and camaraderie.

Rain delays aren’t ideal situations for all baseball and softball players, but there are ways to turn a negative situation into a positive outcome. If you do decide to participate in some friendly rain delay shenanigans with the opposing team, remember to be creative and think outside-the-box and then maybe your team will crack to four Best Fun Rain Delays.

Now, it's your turn. We want to hear from you. Have you ever been a part of a fun rain delay? Leave your thoughts in the comment section below. Meanwhile, if you ever have any baseball bat or softball bat related questions, don’t hesitate to give our Bat Experts a call at 866-321-2287 .