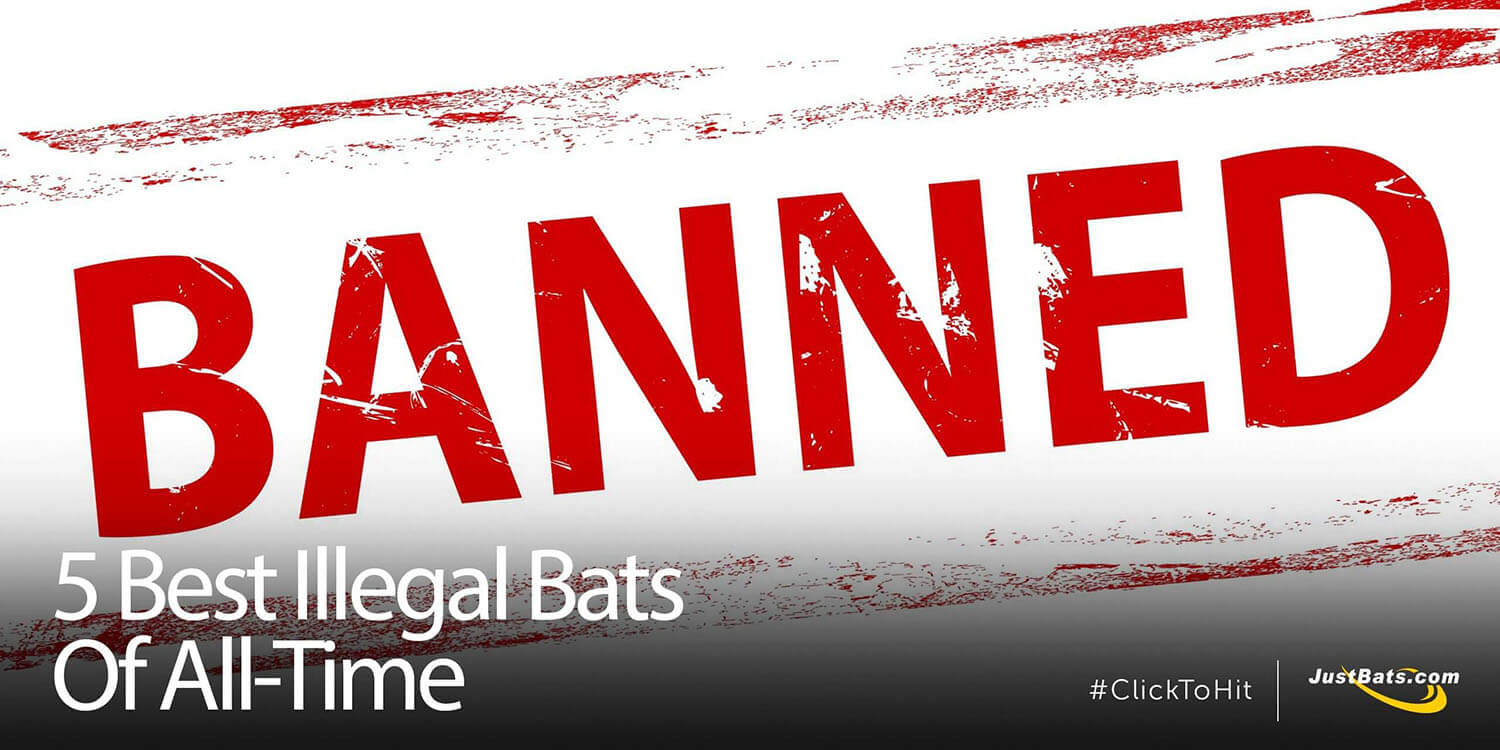 These are words you don't want to see associated with your favorite bat. Baseball and softball leagues have bat standards set by governing bodies that dictate what bats are acceptable for use. To become certified, bats must pass tests conducted by independent labs, which is what BBCOR Certification and USABat Standard use. When a bat passes the independent test, the bat manufacturer is notified, and the corresponding certification stamp can be placed on the bat.

And when a bat doesn't pass? That's when the bats are deemed illegal or banned.

It is possible (and has happened) where a bat passes these tests, but fails a random test given by the governing body of the League. When method is employed, the governing body officials resubmit the bat to the independent labs for further testing. In this scenario, the bat is then "decertified". This happened to the DeMarini CF Zen in early 2017.

Based on talks with officials, vendors, coaches, and customers, here are JustBats.com's five (5) best illegal bats and banned bats, as well as their most similar approved bat.

In April 2017, the bat industry was suprised to hear that eleven (11) Demarini CF Zen youth bat models did not pass the BPF audit; thus, deeming these bats officially removed from USSSA certification. The ruling affected the drop 8 and drop 10 versions of the CF Zen, which cost DeMarini half their youth baseball bat lineup. Plus, DeMarini, in a goodwill effort, had to issue vouchers to upset customers. Initial reviews of the bats suggest that the DeMarini CF Zen contained a little too much pop for the youth field.

Shortly after the BPF audit decision, Demarini released the 2017 DeMarini CF Zen Re-Tooled (DXCBZR). The differences between the original CF Zen that this model carries the USSSA BPF certification, contains an orange "R" to indicate it's the re-tooled model, and, of course, less pop.

Marucci was already on the proverbial map, but the CAT series put the bat company in a whole new stratosphere. Admittedly, the Marucci CAT 5 BBCOR bats (MCB2) weren't all banned, just the 33 inch and 34 inch models. The reason for the decertification was because the CAT 5 made any player a homerun threat. The bats were hotter than the sun's surface and it didn't take long for the governing bodies to notice.

Already one of the most popular BBCOR bats in JustBats.com history, the Marucci CAT 7 BBCOR baseball bat (MCBC7) continues an impressive lineage of the CAT series. Besides being BBCOR certified, this one-piece alloy constructed bat has optimized barrel design, no dead spots, and the AV2 knob minimizes negative vibration on swing.

While the Easton Stealth caused BBCOR, the RIP-IT Prototype BBCOR bat (B1403) attempted to break the rule. Deemed too hot by the NCAA, the Prototype was de-certified in July 2011. RIP-IT released the Prototype II (PROB2), which was approved by the NCAA, and RIP-IT was able to get the original Prototype re-listed. However, after the initial de-certification, many Leagues opted not to allow the bat.

Unlike the other banned bats, there is no great comp for the original RIP-IT Prototype. With the BBCOR Certification established, it will be difficult for a bat to be created with the same explosiveness as the Prototype had.

71 five-star product customer reviews. The COMBAT B2 Composite Youth Baseball Bat (B2YB1 - 12) was nicknamed "Da Bomb" and lived up to its name. Balls exploded off this bat, in large part due to COMBAT's enhanced sweet spot and a balanced design that turned any Little Leaguer into a blue-chip prospect. In 2011, it didn't take long for Little League officials to change course on the bat's certification.

COMBAT baseball bats are now back. Read about what happened and what the future holds.

Comparable approved bat for the COMBAT B2 Youth

Roaring onto the baseball scene since its debut, the Easton MAKO BEAST (YB17MK12) will also be banned from USA Baseball Leagues starting in 2018. But, with its massive sweet spot, swing speed, and superb construction, the BEAST is about as close a youth bat will get to the COMBAT B2 until USABat Standard is in place.

Back in 2013, Louisville Slugger rolled out the oneX softball bats. Unfortunately, the bats weren't available for too long. A manufacturing defect caused cracking--and, in some instances, complete breakage--between the barrel and handle, which actually resulted in 170+ incident reports. Louisville Slugger quickly removed the bats and eventually introduced the most popular fastpitch bat: Louisville Slugger Xeno.

As a nod to its predecessor, the Louisville Slugger XENO Fastpitch softball bat (FPXN170) is actually oneX spelled backwards. This model comes intact with Performance PLUS Composite with zero friction double wall design. Essentially, Louisville Slugger enhanced the oneX's flaw and made a better fastpitch bat for all.

Do you have a bat you wish would be deemed illegal for League play? What about a banned bat that you still own?

Remember, if you ever have any specific baseball bat or softball bat related questions, or you just want to talk to someone about your hitting slump, please feel free to give our friendly Bat Experts a call at (866-321-2287). You may also shoot them an email at  experts@justbats.com or click here to live chat. Don't forget, we're here for you from click to hit!

Filed Under: Bat Rules & Regulations Lists
Chat Us
You can compare a maximum of four items.
Please remove one item to add another.
Add up to 4 items to compare.
Show Comparison
ERRR