Worst First Pitches Ever [With GIFs] 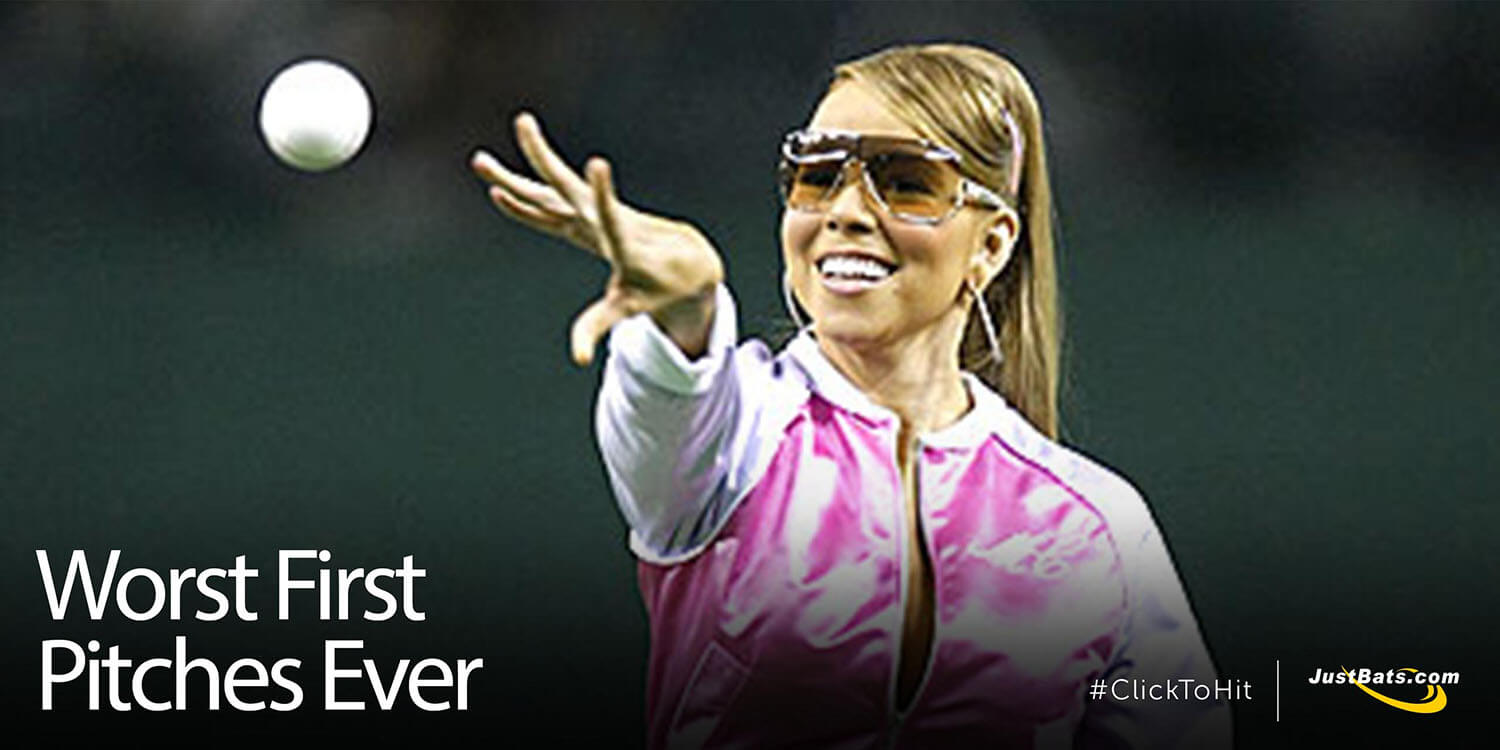 The ceremonial first pitch before all Major League Baseball games is an iconic tradition where a distinguished guest throws a ball to mark the end of pregame festivities. This guest can be anyone from a celebrity, to a hero, or even the President of the United States. They take their place at the front of a pitcher's mound and try their best to throw a strike.

While it is everyone’s dream to throw a perfect strike in front of a huge crowd, that doesn’t always happen. So, here at JustBats, we’ve created this list of the worst first pitches ever. The original first pitch dates back to at least 1890, and it has been a time-honored tradition ever since; especially the pitches with great meaning behind them such as the time George Bush threw out the first pitch after the tragedy of 9/11 . But, we want to discuss the worst first pitches ever, not the best:

More famously known by his pseudonym 50 Cent, this Queens, New York raised rapper grew up a big Mets' fan. But, when he got the opportunity to throw out the first pitch for his hometown team, it did not go as planned.

You'd think, being a southpaw and all, that a man of his stature would be able to hit the catcher square in the mitt. But, as you can see, this is easily one of the worst first pitches of all-time, if not the worst. To his defense, it looks as if the fans in the front row may be heckling him.

Six-inch heels to throw out a ceremonial first pitch? Interesting strategy. Mariah Carey, Grammy's 1991 Best New Artist, threw her first pitch five feet in front of her before it four-hopped to the catcher. Barely better than 50 Cent, plus Mariah was a great sport about it. Look at how happy she looks after she realizes she may have thrown one of the worst first pitches ever.

Not only did Charlie Brown cheat by scooting up closer to home plate during his first pitch at PNC Park in 2010, but he managed to miss his target by...umm...a lot. Maybe if he put his ball cap on straight he would have had a better outcome. Charlie Brown must have been traumatized from all those times Lucy took the football from under his feet, which is why he was so nervous for the first pitch. Luckily, he was able to redeem himself with the help of his friend Snoopy at a Giants game in 2016.

We're not sure if this is one of the worst or one of the best first pitches ever. Shin Soo-ji, a rhythmic gymnast from South Korea, threw out a unique first pitch. Most people are nervous enough as it is to throw a normal pitch, much less a one-legged, upside down, 360 thingamajig beforehand. Talk about a wild windup. But, props to her for throwing it right down the middle. While her first pitch skills are dazzling, check her out in her natural element.

Snoop doggy dog. He should stick to the rap game and running the Snoop Youth Football League, because his baseball skills are subpar. In June of 2016, during a San Diego Padres home game against the Atlanta Braves, Snoop Dogg threw out a dreadful ceremonial first pitch. His pitch was so bad that it went out of the screen and almost hit a bystander standing against the back wall. Hey, at least he had decent mechanics.

Remember the 2012 hit song "Call Me Maybe"? Pop singer Carly Rae Jepsen probably won't field too many calls after this 2013 first pitch at Tropicana Field for the Tampa Bay Rays. Would you still call her after this horrendous first pitch? Maybe.

Oof. This one is hard on the eyes. Not only was it underhanded, but it was a bit awkward. Monique Evans, Miss Texas 2014, celebrated her victory by throwing out the first pitch during a Texas Rangers game. With her tiara intact and her outfit on point, Miss Evans' first pitch was just a bit outside.

Carl Lewis, the 10-time Olympic medal winner for track and field, is no stranger to the podium. It's hard to pick on Mr. Lewis after his illustrious career, but he's made it so easy for us. With this horrendous first pitch at Safeco Field in Seattle (that he quickly tried to call back), he can now take his rightful place on the podium of first pitch nightmares. Sorry, Carl, you don't get a second chance at a "first" pitch.

For those of you who don't know, Gary Dell'Abate (also known as Baba Booey), was the producer of the Howard Stern show, one of the most popular American talk radio shows of all-time. Howard Stern made sure to let him know what he thought of his performance and was quoted saying, "The most embarrassing ceremonial first pitch in baseball history. It was a disaster."

On Opening Day in 2007, the Cincinnati Reds brought in their Mayor to throw the ceremonial first pitch. Move over, 50 Cent, because Mark Mallory may have the worst first pitch in MLB history. Mallory almost hit the umpire standing down the first base line during his wide-left throw. Once the umpire picked up the ball, he then quickly acted as if he was throwing the mayor out of the game. Now that is funny.

As a bonus, we've decided to add in not the best first pitch but the cutest first pitch. Tillman the Bulldog was most famously known as the dog who could skateboard, skimboard, and surf.  When he got a lot of notoriety for his talent, the Dodgers brought him in to "throw out" the first pitch at Dodger Stadium back in 2013. They strapped a baseball to his back and had him run from the pitcher's mound to home with "Who Let The Dogs Out" playing in the background. The crowd loved it!

If you have any baseball bat or softball bat related questions, our friendly Bat Experts are available via phone (866-321-2287), email ( experts@justbats.com), and live chat! Remember, we're here for you from click to hit!

Filed Under: MLB Uncategorized
You can compare a maximum of four items.
Please remove one item to add another.
Add up to 4 items to compare.
Compare (0 of 4) Show Comparison
ERRR