Why Cork A Baseball Bat?

MLB Rule 6.06(d) states that a batter is out for illegal action when he uses a bat that, in the umpire's judgment, has been altered.

Wooden bats don't have a lot of variances. Because of that, the slightest change can create a large competitive advantage for a player. JustBats.com examines why past players have opted to break rules and cork a baseball bat.

Note: JustBats.com does not condone corking a bat or participating in any modifications to a bat that result in an unfair advantage.

First of all, a corked bat is a modified baseball bat that has been filled with a lighter, less dense substance in an effort to make the bat lighter. As the MLB rule states, it's not the bat being lighter than makes a corked bat illegal, it's because lighter wood bats are shorter than heavier bats and the bat is no longer a one piece of solid wood.

The Benefits Of A Corked Bat

Notable players who have been caught with a corked bat include Albert Belle, Amos Otis, Sammy Sosa, and Graig Nettles. They all faced ramifications from MLB, as a result. So, why did they risk it? Here are the advantages of a corked bat: 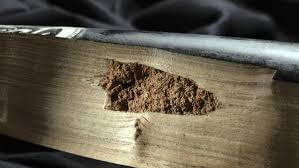 Essentially, corking a baseball bat means you're trading out batted-ball speed for faster swing speed. A corked bat doe snot make a baseball travel faster or further.  In conclusion, there are minimal benefits to a corked bat, but studies have proven that the benefits might be more psychological than tangible for a player. So, like nearly everything, it's not worth cheating.

Do you know someone who has corked a bat? What do you think of this practice? Let us know in the comments.

If you have any baseball bat or softball bat questions, please give our Bat Experts a call at 866-321-2287 , send us an email at support@justbats.com  or  click  here to live chat with our bat experts. And remember, we are always here for you from Click to Hit!

Filed Under: Wood Bats Bat Rules & Regulations
You can compare a maximum of four items.
Please remove one item to add another.
Add up to 4 items to compare.
Compare (0 of 4) Show Comparison
ERRR