What Happened To Titanium Bats?

In 1993, the slow pitch softball world welcomed titanium bats. Vendors, such as Easton, Louisville Slugger, and Worth, all produced bats made of this dense metal to the delight of softball players.

But, given performance standard and safety issues, the bats became obsolete in a short period. However, despite the short existence, titanium softball bats impacted softball. JustBats.com details the ins-and-outs of titanium bats and how they helped to change the game.

As a metal, titanium has one of the highest strength-to-weight ratios. That's because it's a strong metal with low density. So, when Easton was the first bat manufacturer to introduce a titanium bat (Easton Titanium Typhoon) in 1993, the softball bat was extremely popular. Some of the features of the Easton Titanium Typhoon:

While the Easton Titanium Typhoon was the first titanium bat on the market, Worth developed the first titanium bat in 1988. In fact, Worth developed, produced, and tested their Titanium Ti51 model and only started selling it in 1993 when Easton introduced their bat. Worth's slow pitch bat had an aluminum knob welded to the handle. This was also a popular bat -- $700 retail and only 3,000 created.

Louisville Slugger's titanium bat (Louisville Slugger TPS Titanium) retailed for $800 and was also produced in limited quantities. All three manufacturers were aware of the effects of titanium metal, so each bat carried the following warning: 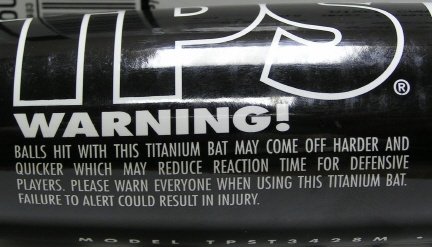 WARNING! Balls hit with this titanium bat may come off harder and quicker, which may reduce reaction time for defensive players. Please warn everyone when using this titanium bat. Failure to alert could result in injury.

Remember, this was in 1993 before BBCOR and USABat Standard. But, since the titanium bat was the first major bat progression since 1972's composite bat introduction, the softball governing bodies took notice.

While titanium bats were only around for a couple of seasons and not many were produced, their implications on softball still remain.

Titanium bats were the first softball bats to hit batted-ball speeds of 100+ mph. While some high-performing bats have been produced with similar results, they have been subsequently banned from play. Still, composite bats have surpassed what titanium bats had achieved.

Vendors have attempted to replicate titanium bats in past years (ex. Toloso Maximus). However, the bats remained banned in all Leagues.

What do you think? Did you ever swing a titanium bat? Would you?

Meanwhile, if you ever have any baseball bat or softball bat related questions, don’t hesitate to give our Bat Experts a call at 866-321-2287 , send us an email at  experts@justbats.com  or click  here to live chat with our bat experts. And remember, we are always here for you from Click to Hit!