Vendor Of The Week: DeMarini 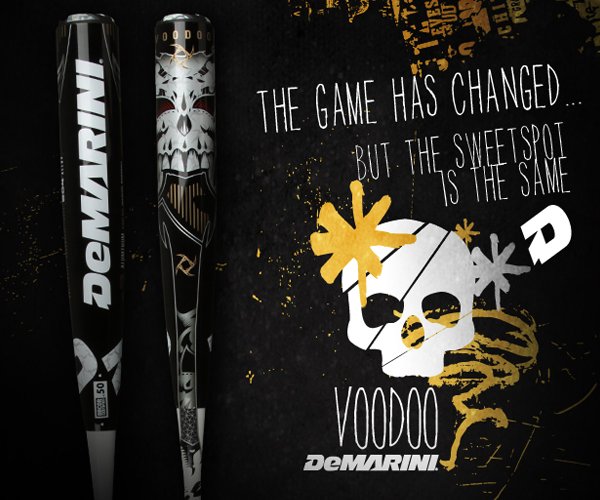 History and Background of DeMarini:
In 1992, DeMarini Sports had something to celebrate. The three-year-old company had climbed a rung on the proverbial ladder of success, moving its world headquarters from a dirt-floored barn to a slightly larger metal shack. "It was a big move for us," recalled Ray DeMarini from the batting cage of DeMarini Sport’s present-day Bat Industrial Complex. "The new shop was larger, more storm resistant, and -best of all- it had a heater."

In the early days, DeMarini Sports hardly made a blip on the radar screen of softball. With no retailers and virtually no advertising budget, DeMarini grew steadily by selling high-performance bats directly to customers. While established companies made "juiced" bats for the pros and ordinary bats for the public, DeMarini focused on making one line of high-performance bats for pros and amateurs alike. This approach, combined with a passion for the sport, led to the greatest innovation in softball history - the world’s first multi-wall bat: the DeMarini Doublewall.

Released in 1993, the DeMarini Doublewall was the world’s first multi-wall bat. Like a modern golf driver or oversized tennis racket, the Doublewall had a giant "sweetspot," which allowed average players to hit like pros. DeMarini’s sales exploded, and before long opposing bat manufacturers to notice. DeMarini - a homegrown company led by a softball fanatic - had shaken the establishment silly.

To understand the rise of the DeMarini Dynasty, you need to know Ray DeMarini. A cult hero among avid players, Ray DeMarini emerged on the professional softball scene at the age of 40, a veritable geriatric among younger players. With a scientific approach to training, a batting speed of 96 miles-per-hour and a bombastic attitude, DeMarini fast earned a reputation as a savage competitor.

In June of 1987, ESPN launched a nationwide search for a hardcore player to advise on a series of instructional softball videos. When approached by producer Erich Lytle, the biggest boys in softball repeatedly spoke of a five-foot-seven softball giant—Ray DeMarini. DeMarini had mastered reflex hitting, a technique that drops the ball squarely between the infield and outfield. Impressed with DeMarini's knowledge and scientific approach to training, Lytle not only hired Ray as an advisor—he hired him as the host. Together, they produced Ray DeMarini's Reflex Hitting System, ESPN's most successful home video to date.

Having garnered national recognition through ESPN, Ray turned his efforts toward designing a high-performance bat for the masses. To accomplish this, he needed an engineer. "Not just an engineer," he said, "but a boot-strapping rocket scientist who could build an empire with pocket change." Ray's call was answered by Mike Eggiman. Having grown up on a farm, Eggiman was adept at making the most of a situation. Case in point: the company's first piece of automated bat-making equipment had the heart of an abandoned washing machine.

In 2000, DeMarini joined forces with Wilson Sporting Goods to develop the next generation of hitting technology. Ray believed it was a perfect fit, as both companies shared a vision of developing game-enhancing equipment for avid players. What’s more, the companies had complimentary products: Wilson was the leader in gloves, balls and protective gear, while DeMarini made the world’s finest bats. According to Chris Considine, Vice President/General Manager of Wilson Sporting Goods: "The thing that struck me most about DeMarini was their passion for sports and their true competitiveness.

Within a year, DeMarini unveiled the industry’s first concept bat, the $35,000 F1. Secured under lock and key at the DeMarini Bat Industrial Complex in Hillsboro, Oregon, the F1 served as a technological storehouse for future products, including DeMarini’s landmark Half & Half system.

In December 2001, 12 years after the genesis of DeMarini Sports, Ray DeMarini died of cancer in his Northwest Portland home. He was 55. The next summer, the Portland Metro Softball Association paid homage to the “King of Softball” with the dedication of Ray DeMarini Field. Formerly known as Delta #1, the field was DeMarini’s favorite place to test bats during the early days of business. Ray DeMarini—bat maker and player extraordinaire—was remembered for his high-performance softball bats and unwavering encouragement of everyday players. Today, a 40-foot sign announcing RAY DEMARINI FIELD graces the outfield, and an interpretive display chronicling Ray’s life greets players as they register for games.

More "Insane Dedication to Performance" is in store for tomorrow.

Filed Under: Vendors / Brands
You can compare a maximum of four items.
Please remove one item to add another.
Add up to 4 items to compare.
Compare (0 of 4) Show Comparison
ERRR