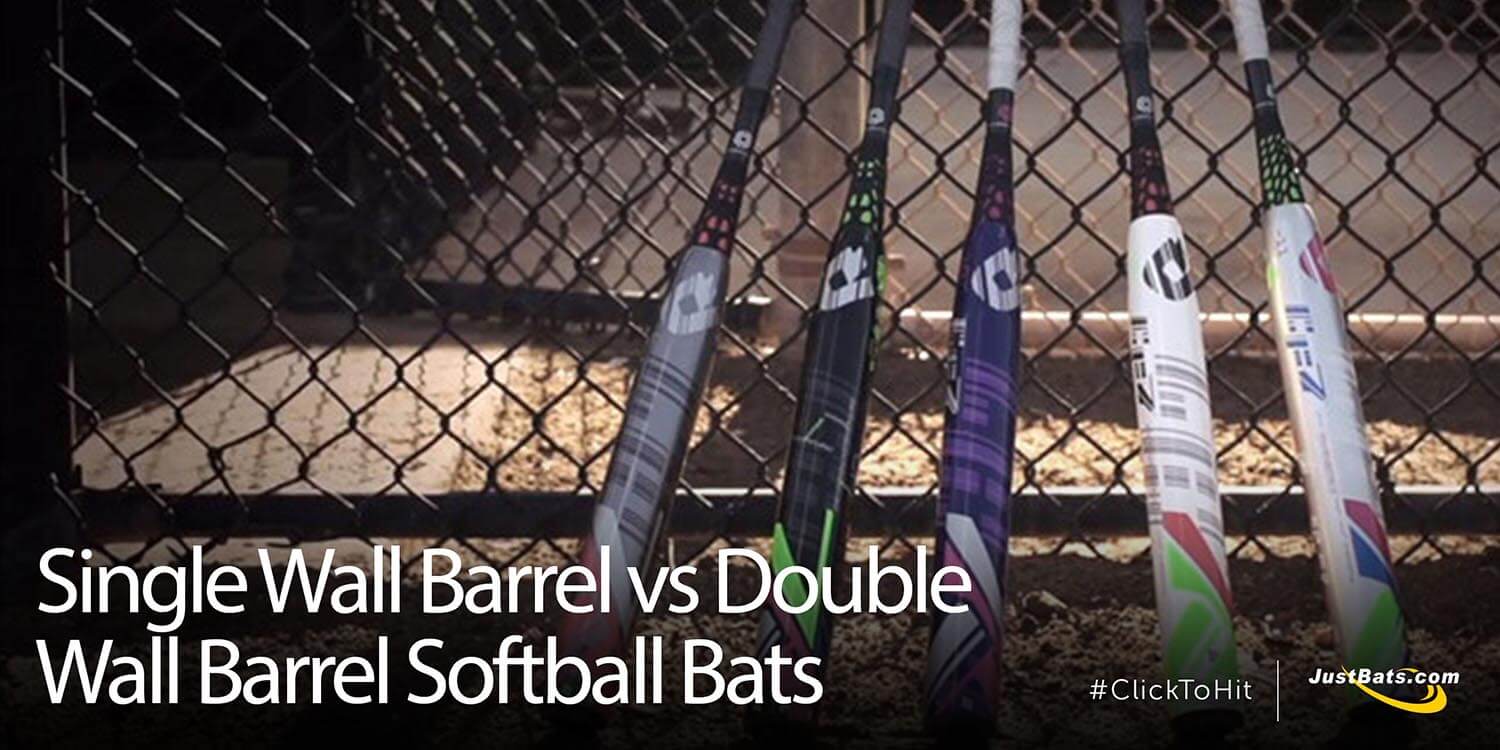 Finding the right softball bat is the single most important part of every player's game, and the debate between single wall and double wall bats has always been a topic of discussion in the softball community. In a sports world chalked full of league restrictions and regulations, it is extremely beneficial to know all of the ins and outs of your slow pitch softball bat.

Certain Leagues will require a single wall bat while others will allow both single wall and double wall. Why is that? What are the biggest differences between the two? Which bat performs better? Does one have superior durability? How does the pop compare? Why should I use one over the other? Don't worry, JustBats has the answers. The terms "single wall" and "double wall" typically apply to aluminum or metal bats  and barrel design condenses down to three things: performance, durability, and the safety of players and umpires. As far as performance and durability go, it is hard to determine which design is the best choice for you as it will end up being a personal preference or League requirement. Due to certain League restrictions (whether it be ASA, USSSA, ISA, NSA, or SSUSA), performance and the batted ball speed should be equal across all softball bats in each respective League.

To explain in more detail, batted ball speed is how fast a ball comes off of a bat. This speed needs to stay at a certain speed so that players don't get hurt trying to field on defense. Durability is a different story. The comparison of durability between single wall and double wall vary and could change on a case-by-case basis depending on the particular player or softball bat. On the other hand, the safety of those around you is the main reason why certain leagues require a single wall softball bat and don't allow a double or multi-wall barrel bat. Here's why:

Used mainly by players in leagues with tighter restrictions, single wall bats tend to be more "safe." A single wall bat is still a reliable performer at the plate and should last for multiple seasons if taken care of correctly, but it lacks pop in comparison to a double wall bat (in most cases). The batted ball speed, on average, is lower in a single wall than in double or multi-wall. While this seems like a deal breaker to most, single wall bats do come with their advantages.  What are they, you ask?

For starters, tremendous sweet spots are the main benefit of single wall barrel bats. The construction process and material used in single wall bats allow for the added length of hitting surface, which provides more confidence during at-bats with exceptional plate coverage. Another key component of single wall bats is the price. Since less material is used it tends to result in a significantly lower price point. For players looking to avoid breaking the bank without compromising durability, single wall softball bats are fantastic choice. As a matter of fact, the popular DeMarini Steel has been claimed to perform better than most double wall bats.

In today's day and age, composite softball bats are the most popular and most commonly used on the diamond. But, they are also the most dangerous when it comes to batted ball speed. Known for having more pop than their alloy counterparts, composite bats will almost always have a double or multi-wall barrel construction. But, there are alloy bats that feature a double wall barrel design as well. While many claim that double-walled barrel bats will last longer due to their thicker walls, again, that is not always the case.

There are so many factors that go into determining the durability of a bat and barrel design is only one of those. The main advantage to owning a double wall bat is the trampoline effect experienced during each hit.  If one hits a softball hard enough to flex both walls, double wall bats will outperform single wall bats ten times out of ten.

Does your League require a single wall bat? Have you ever swung one before? Which one do you think performs the best out of the two? Please leave a comment below to keep the discussion flowing! Or, if you have any softball bat related questions, please give our friendly Customer Coaches a call at any time of the day at 866-321-BATS (2287). Remember, we're here for you from click to hit!

Filed Under: Slow Pitch Bats Softball Bats Vendors / Brands Uncategorized
You can compare a maximum of four items.
Please remove one item to add another.
Add up to 4 items to compare.
Compare (0 of 4) Show Comparison
ERRR