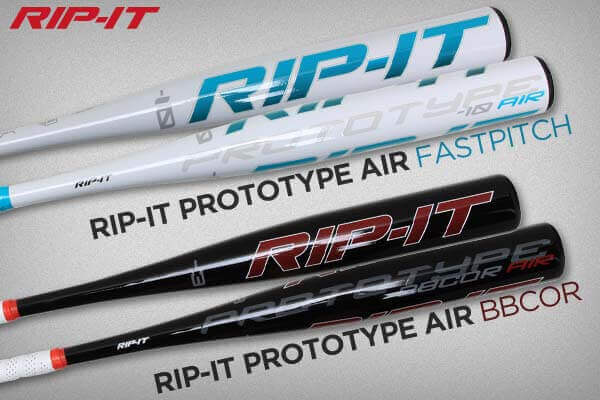 RIP-IT’s new AIR technology is now available for baseball players in the Prototype BBCOR AIR and for fastpitch players in the Prototype -10 AIR. Simply put, these two bats will be some of the most balanced bats on the market. This will result in better bat control which can help keep you alive at the plate with two strikes or turn a foul ball into a double in the gap. The extreme balance in the new Prototype AIR will also result in an increase in bat speed allowing you to hit for more power!

Now lets look at the Fastpitch model of the Prototype AIR. The new Prototype AIR will deliver nearly twice the performance as the Reaper and Force bats of old. The main difference between the baseball and fastpitch models of the Prototype AIR is the fastpitch model features R1 composite rather than alloy. The R1 composite is thinner, which allows for more layers, and stronger, which makes for a higher performing bat. The Harmonic barrel not only gives players a larger sweet spot, but creates the sound of a perfect hit. The Ridge grip on the handle is composed of Advanced Memory Foam for added comfort and is designed to eliminate vibration. The elimination of the fear of bad vibration will result in a more confident hitter at the plate.

Don’t just take our word for it. Check out the reviews from some very satisfied customers.

“Wow.... just wow, if you thought the first rip-it bat was sweet. you need to get this bat. larger sweetspot, more comfortable grip. most balance bat i've ever held. this new technology they were talking about is legit.” - Kballer

To make the deal even sweeter these bats are made in the U.S.A. and come with RIP-IT’s 30-day “Love It or Return It” performance guarantee. Check out RIP-IT’s full line of high performing baseball and softball bats and use our Bat Comparison tool on JustBats.com to compare these bats with all of our other fantastic options. If you need help figuring out which bat is right for you, be sure to utilize our Bat Coach and Bat Resource Guide.

Filed Under: Baseball Bats Products
You can compare a maximum of four items.
Please remove one item to add another.
Add up to 4 items to compare.
Compare (0 of 4) Show Comparison
ERRR