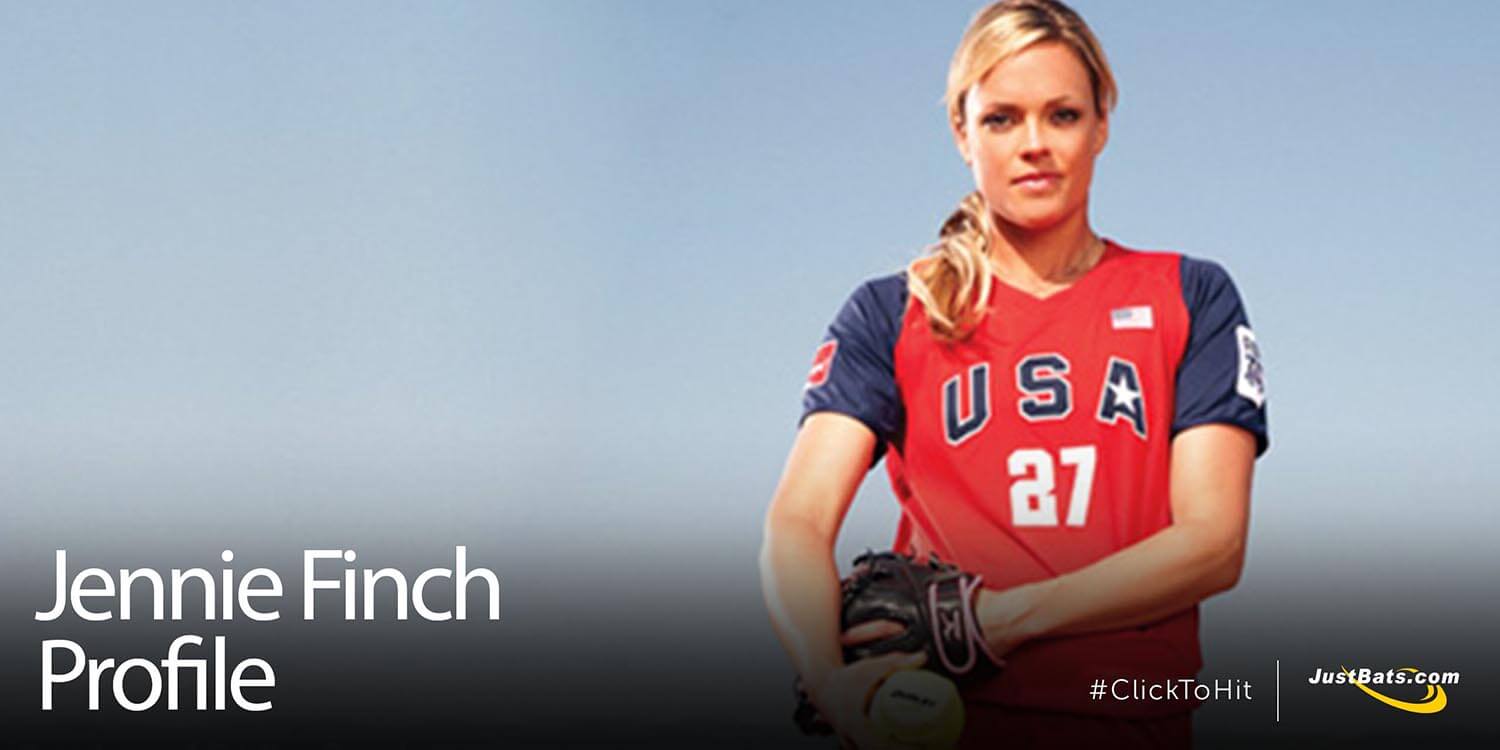 Jennie Finch is the name, and Fastpitch softball is her game. Known by some as the Pitcher with the Ponytail, Finch has accomplished a lot throughout her educational and professional softball career. There may never be another player or person like Jennie Finch in the world of softball ever again, which is why JustBats has chronicled her legacy.

We've started with her childhood days and outlined her career and all that she's achieved in both softball and her life. Everything from her days in high school to her professional career is covered in depth to show the impact Jennie Finch has had on softball.

Jennie Finch was born on September 3, 1980. Her parents, Doug and Bev, raised Jennie and her two older brothers in La Mirada, California. Growing up, the whole family loved baseball (especially the Los Angeles Dodgers). Her father was her first ever pitching coach, and he spent countless hours devoting his time, effort, and money to help mold one of the greatest pitchers of all time. Finch first started to pitch at the age of eight, and by the age of 12, she had helped lead her travel ball team, the California Cruisers, to the 12U American Softball Association national title. A second national title followed at 14 years old. During high school, at La Mirada High School, Finch lettered all four years and was the team captain as a senior. Back in 2016, La Mirada retired her jersey number to honor her accomplishments and highlight everything she has done to give back to her community.

Coming out of high school, Jennie Finch was a highly sought after prospect. Eventually, after much thought and consideration, she decided to become a Wildcat and attend the University of Arizona. Being close to home and entering into a winning program, Finch thrived. As a freshman, Jennie threw her first career no-hitter, managed to hit a career high in doubles, and led her team to a World Series appearance. While her team fell short of a National Championship, she gained valuable experience and confidence that would show throughout her final three years. During her sophomore and junior season, Jennie Finch earned First Team All- American and First Team All-Pac-10 (now known as the Pac-12) during both of her immaculate seasons. Additionally, her junior season, she also won the Pitcher of the Year award and the Softball Player of the Year award.

To finish out her collegiate career, Finch had a tremendous senior year. She not only had a cannon of an arm but she was a terror to other pitchers at the plate. Yet again, she was honored as a First Team All-American and a First Team All-Pac-10 player. During her last stand, she set records, pitched three no-hitters, and tied her record of 35 consecutive scoreless innings (over a span of five games)! To name of few of her untouchable statistics from college, we have compiled a list below:

As you can see, from 1999 to 2002, Jennie Finch had a tremendous impact on the Fastpitch softball program at the University of Arizona. In 2003, her number 27 was retired by the Wildcats. But, her legacy was just beginning. 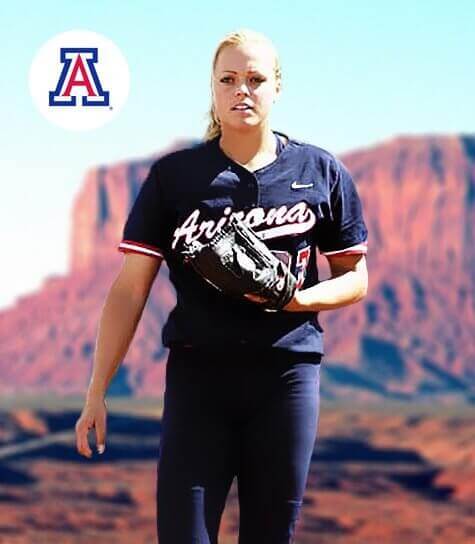 As if Jennie Finch's collegiate career wasn't impressive enough, she also played for the United States National Team and dominated at the global level. She participated in both the 2004 and 2008 Olympics and helped Team USA win one Gold and one Silver medal. The 2004 Olympics in Athens was a breeze for Finch. She led Team USA with 13 strikeouts, gave up only one hit, and finished with a 2-0 win-loss record. Her elite pitching had a huge impact on winning Gold that year.

Now, 2008 was a different story. While Finch continued to put up eye boggling numbers, Team USA had more fierce competition and a harder path to the top. They won their first three games handily with an 11-0 win over Venezuela, a 7-0 victory over Chinese Taipei, and a 9-0 win over China. But, in the Gold medal game, USA sadly lost to Japan in a 3-1 barn burner. This was the last year softball was a part of the Olympics, but both baseball and softball will be reinstated for the 2020 Olympics. 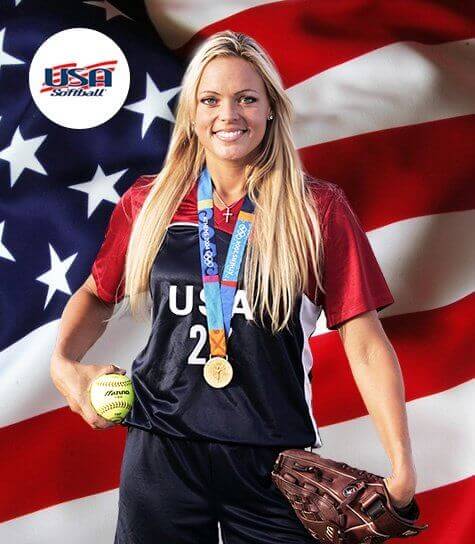 The National Pro Fastpitch (NPF) softball teams were drooling over Jennie Finch after her performance in the 2004 Olympics and understandably so. Eventually, and luckily for the state of Illinois, Finch became a member of the Chicago Bandits and played from 2005 to 2009. Her illustrious five-year career showcased all of her talents, and then some. To highlight her Hall of Fame career, during the 2008 season, Finch allowed only one double, no triples, and no home runs while posting a 7-2 record. Statistics like that are unheard of in the sports world, regardless of the sport. The Bandits enjoyed having Finch be a part of their team so much that they named the street their stadium is on "Jennie Finch Way."

Unfortunately, in July 2010, Jennie Finch officially announced her retirement from softball. As she said, "I just feel like it gets harder and harder every year with Ace getting older and time away from my husband and even family events such as birthdays and friends' weddings and things that I've always just missed out on because of softball." 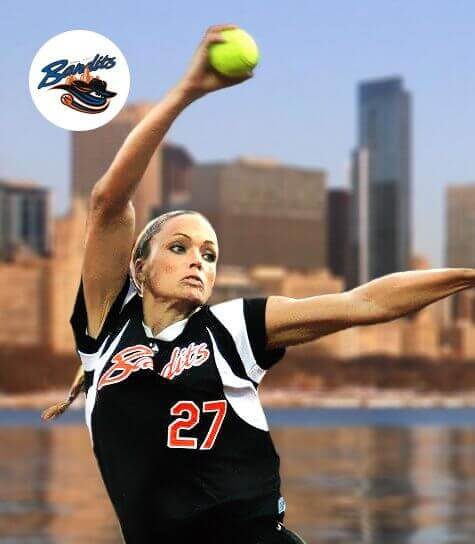 Finch + Mizuno = A Match Made In Heaven

Mizuno, a worldwide leader in baseball and softball equipment, saw something special in Jennie Finch at an early stage in her career and decided to partner with her. Through countless sessions and valuable insight, the two created both softball bats and softball gloves that were inspired by feedback from the legendary Gold medalist herself. These bats and gloves include:

Finch's glove and bat lineup consists solely of youth models, because she has a desire to inspire younger softball players across the globe. In December 2015, Mizuno reached an agreement to extend her contract through the year 2020. While she may be retired from competitive softball, Finch continues to run softball camps, a softball academy, and stays very active within the fastpitch softball community. Finch has coined the phrase, "Dream and Believe" to give hope and inspiration to all softball players. Additionally, Jennie Finch has come to be known for her motivational speeches and timeless quotes, including:

Jennie Finch has done so much on and off the field. She has dominated the diamond, become a successful business woman, and given back through way of youth camps and charitable events. Her charitable contributions include organizations such as the Fellowship of Christian Athletes, Breast Cancer Research Foundation, and the Wounded Warrior Amputee Softball Team. Finch is a one-of-a-kind human being. Wouldn't you agree? Do you have a favorite Finch memory? If yes, leave your story in the comments section below. We love to hear about one of our favorite players through the eyes of her biggest fans.

Don't forget, if you have any baseball bat or softball bat related questions, please give our helpful Bat Experts a call at 866-321-BATS (2287). They are available seven days a week, and will be there for you from click to hit!

Filed Under: Fastpitch Bats Vendors / Brands Guest Posts, Profiles, Q&A
You can compare a maximum of four items.
Please remove one item to add another.
Add up to 4 items to compare.
Compare (0 of 4) Show Comparison
ERRR