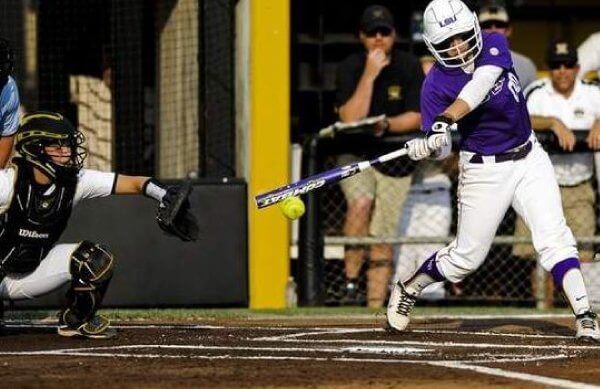 The Louisiana State Tigers secured their spot in the Woman’s College World Series, with a little help from Combat.

Combat Avaritia in action at the Columbia, MO Super Regional

May 28th, 2012. Kent, WA – The Lady Tigers from Louisiana State University are on their way to one of the greatest NCAA events of the year; the Woman’s Softball College World Series in Oklahoma City where they will face the top-ranked Cal Golden Bears in their opening game. LSU defeated Missouri 3-1 Sunday night to cement their place in the final.

LSU coach Beth Torina could not have asked for a better first season with the team. The Tigers are peaking at the right time and are ready for this next hurdle. The goal from day one was to make the postseason and that is just what they have done. “There is trust in each other and in the coaching staff and it’s really paying off,” added some of the LSU players..

Against Missouri in the decisive third game, the turning point came in the bottom of the third – down 1-0, the Tigers came up with a bases-loaded double that plated three runs and LSU never looked back.

Coach Torina wasn’t the only one supporting her team all season - LSU’s equipment supplier, Combat Sports has also been rooting for the softball team since before the season began. Early on, coach Torina and Combat’s engineers sat down to create the Avaritia. It is Combat’s first two-piece fast-pitch bat and has been flying off the shelves since it was released in November.

LSU’s line-up of North American-made Combat Avaritia bats were seen during the team’s season and will be featured nation-wide throughout the WCWS – further promoting Combat’s passion for the game and philosophy of “for players, by players.”

Combat’s staff sends their best to the LSU Tigers and remind them that there’s a little bit of extra passion built into each and every one of their bats.

Interested in the Combat Avaritia? Come grab one today from JustBats.com!

Filed Under: Products Softball Bats Vendors / Brands
You can compare a maximum of four items.
Please remove one item to add another.
Add up to 4 items to compare.
Compare (0 of 4) Show Comparison
ERRR