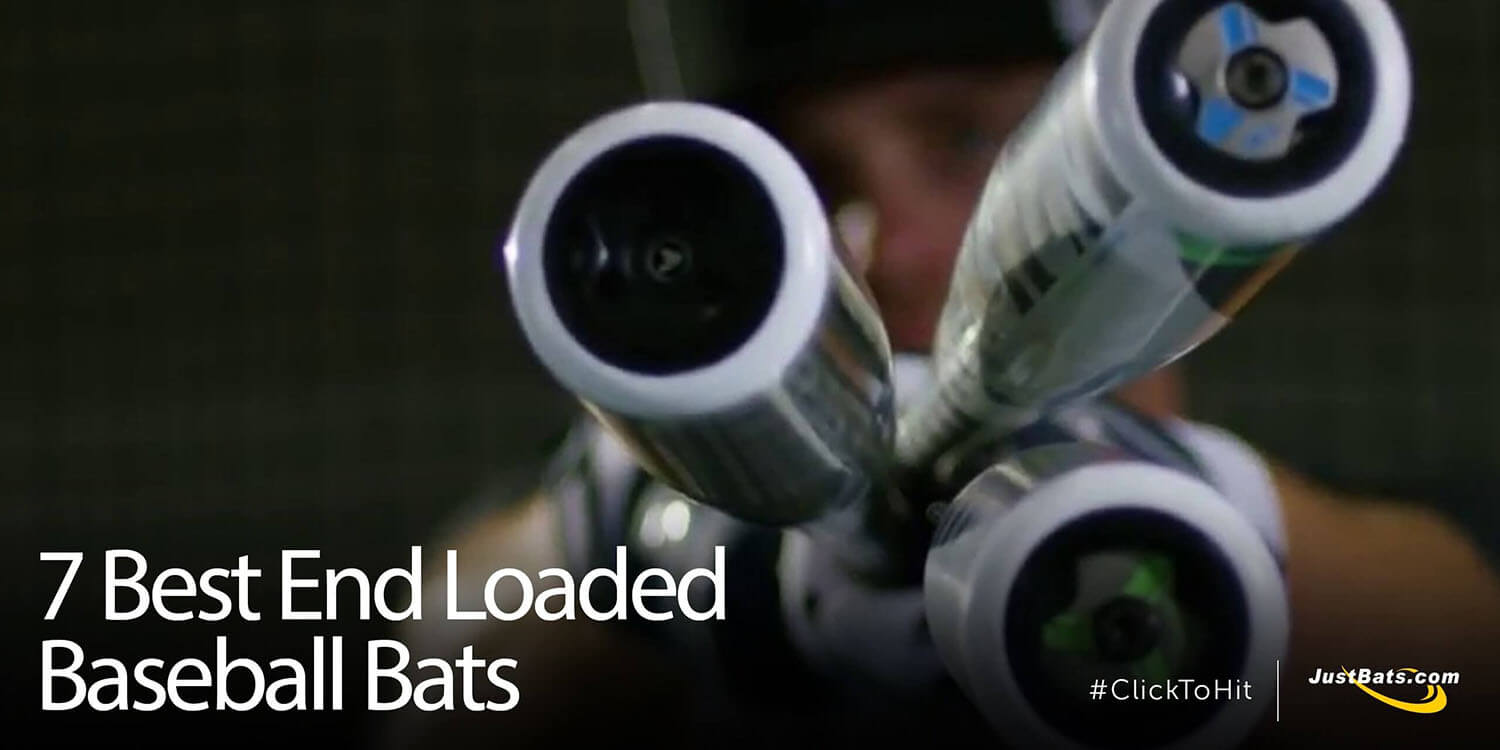 What's better between a balanced bat and an end loaded bat? The answer is 100% subjective and will vary from player to player and bat to bat.

End loaded bats tend to be favored by power hitters, but all types of players use these bats. Because of that, JustBats.com has ranked the best end loaded bats based on customer feedback, reviews, and popularity.

Before we get started, what exactly is an end loaded bat? If a bat is end loaded, a portion of its weight is concentrated towards the end of the barrel near the end cap which causes the bat to have a "top-heavy" feel. By placing more mass directly in the hitting zone, stronger hitters can generate more momentum with similar swing speeds resulting in the ability to hit the ball a greater distance. With that being said, here are the seven (7) best end loaded baseball bats in the game today.

*Note: Images used throughout this article are all BBCOR bats, but the descriptions and the features apply to both youth baseball bats and youth big barrel bats.

The pun was intended when DeMarini released this "insane" baseball bat. This end loaded bat was designed for a player who is already comfortable at the plate and wants an added bump to their game. Utilizing DeMarini's ParaFlex Composite Barrel Dynamic Fiber Orientation for maximum pop, feel, and durability, the DeMarini CF Insane is similar to taking a sledgehammer to your next at-bat. Other features of the DeMarini CF Insane include:

The King of Ping. Due to the owning the biggest aluminum barrel in baseball, the Z-CORE baseball bat is audibly powerful. More barrel means more sweet spot, which turns into more power. With the Z-CORE internal core technology combined with the HMX (Hyperlite Matrix) alloy, the sweet spot has expanded for more hitting surface while the durability has improved tremendously. Other features of the Easton Z-CORE XL include:

Easton opted not to include this bat in their 2017 lineup; opting for the Z-CORE instead. But, the bat has received great reviews, including "Best bat I've ever used" and "well-balanced for an end loaded bat." This baseball bat was one of the first enhanced by Easton's TCT Thermo Composite Technology, which allowed the MAKO XL to have a massive sweet spot. Other features of the Easton MAKO XL include:

Round 2 on the X2. After experiencing success with the 2015 version, the Adidas EQT X2 is back. This baseball bat uses Damascus Alloy, an extremely resilient and responsive blend of metals that is tuned for maximum trampoline. So, the swing weight is optimized for the prototypical power hitter by extending the barrel for a huge sweet spot and end loaded feel. Other features of the Adidas EQT X2 include:

The Easton Z-CORE's successor delivers one of the best alloy designs of all-time. With one of the most dominant aluminum barrels in baseball, the Easton Beast X also uses ATAC alloy as the backbone for its explosive sound, premium power, and invincible strength. Easton went above and beyond for this bat model. Other features of the Easton Beast X Loaded include:

What do you think? Have you had the chance to swing one of these end loaded bats? Which one is your favorite? Did we leave one off that you feel should be on this list of the best end loaded bats? Feel free to leave a comment below letting us know your thoughts to start the conversation. Or, if you have any  baseball bat or softball bat related questions, our Bat Experts are available via phone at 866-321-2287, email at experts@justbats.com, or you can  click here to live chat. Don't forget, we're always here for you from click to hit!