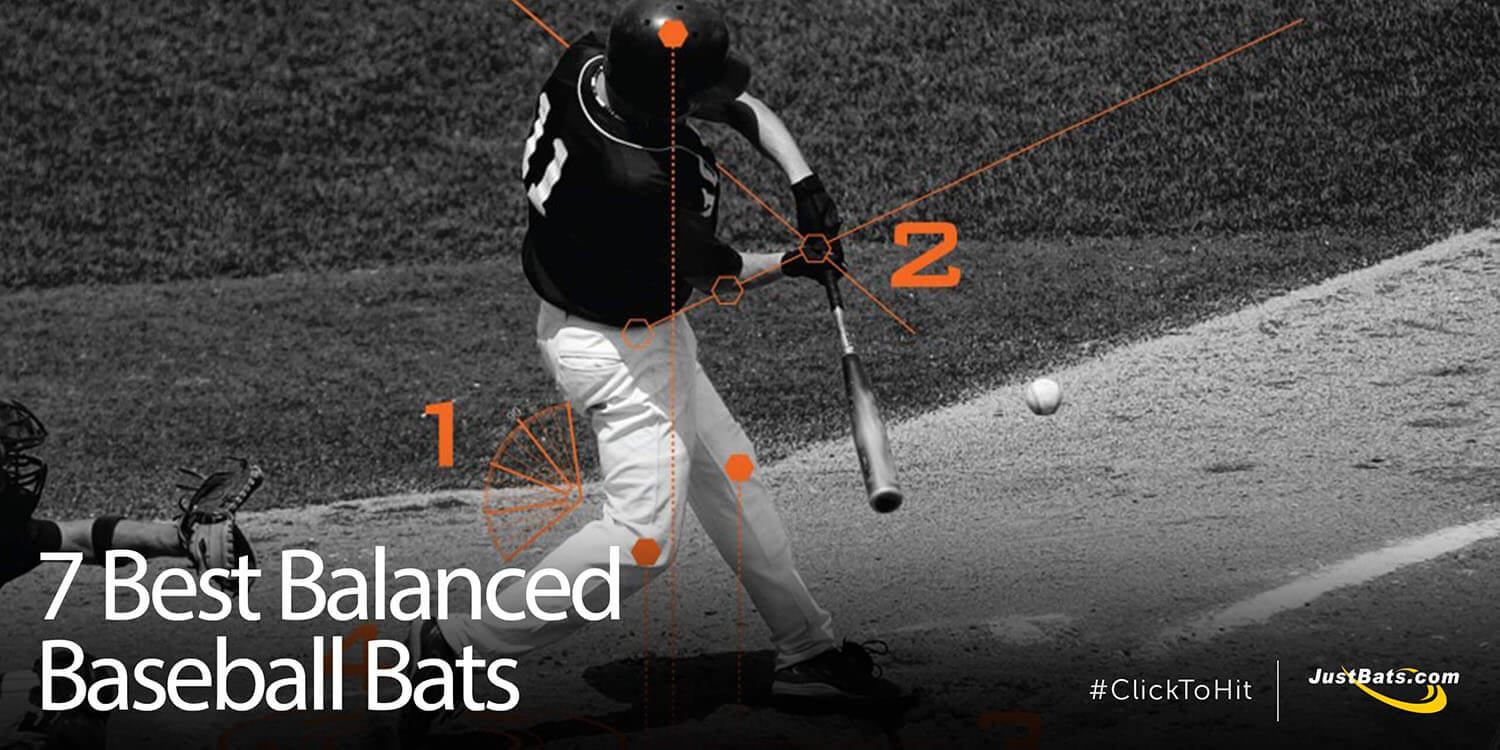 What's better between a balanced bat and an end loaded bat? The answer is 100% subjective and will vary from player to player and bat to bat.

Balanced baseball bats tend to be the preferred option for contact hitters, but all types of players at every level of the game use them. Because of that, JustBats.com has ranked the best balanced bats based on customer feedback, reviews, and popularity.

Before we get started, what exactly is a balanced bat? If a bat is balanced, the weight is evenly distributed from the end of the barrel all the way to the tip of the handle, which helps create faster bat speeds, exceptional control, and ultimately more power through your entire swing plane. This allows batters to maximize performance without sacrificing control at the plate. With that being said, here are the seven (7) best balanced bats in the game today.

*Note: Images used throughout this article are all BBCOR bats, but the descriptions and the features apply to both youth baseball bats and youth big barrel bats.

Brennan, a baseball player who left a review of the CAT 7 on JustBats.com, said, "If you're looking for a bat that is smooth, balanced and produces the pop and power you need, look no more. The Marucci Cat7 will not be beat."

He hit the nail on the head with one of the most highly reviewed baseball bats on the web. The CAT 7 from Marucci took two years in the making, and it is not only one of the best balanced bats in the business, but it is one of the most powerful tools you can bring with you to the plate. With a one-piece, AZ4X alloy construction, Marucci's most popular model delivers enhanced ping with unbeatable durability. Other notable features of the Marucci CAT include:

The MAXUM baseball bats were in grave danger of being discontinued for good when COMBAT declared for bankruptcy in July of 2016. That's when the JustBats.com team put a plan in place to keep the bat with the biggest barrel around. In a world full of two-piece, composite designs, the MAXUM features a unique one-piece construction that sets itself apart from other big name bats. As the exclusive seller of the 2018 MAXUM bats, we have decided to offer a 30 Day Money-Back Guarantee so that you can see for yourself how insanely balanced these bats truly are, and if you're not satisfied, then you may return it for a full refund or exchange with no questions asked. Other features of the COMBAT MAXUM include:

For the 2018 season, Louisville Slugger developed swing weight scores so that players, parents, and coaches have a better understanding of which bats are balanced and which bats are end loaded. With a swing weight score of 1.1, the Solo 618 is the most balanced bat in the Louisville Slugger baseball lineup. This low score is thanks in large part due to the Speed Ballistic Composite (SBC) end cap that reduces unnecessary weight towards the end of the barrel without sacrificing durability. Other key features of the Solo 618 include:

Arguably the most balanced bat on this list, if not the most balanced bat for the past couple of seasons, is the Rawlings VELO. Year after year and season after season, Rawlings masterfully crafts this one-piece, all aluminum design that is primarily recommended for top of the lineup hitters who are great at hitting for the gaps and getting on base. Much like the Solo 618, the VELO has what's called the Comp Lite end cap that guarantees a light swing weight and helps you catch up to faster pitch speeds. Other key features of the Rawlings VELO baseball bats include:

DeMarini doesn't know how to make a bad bat, and they are especially fantastic when it comes to creating balanced composite baseball bats. The CF Zen is one half of DeMarini's 2018 composite lineup, while the other half is called the CF Insane. Essentially, these two bats are the same except for the fact that the CF Insane is end loaded while this beautiful bat is extremely balanced. Other key features of the DeMarini CF Zen include:

With a mission to deliver high performing baseball bats, Easton has engineered a technically powerful design with a supernatural feel and unheard of bat speeds. The 2018 Ghost X is scary good and exceptionally balanced. This two-piece, 100% composite construction utilizes Easton's X-tended barrel to offer the longest composite barrel in baseball, an incredible sweet spot, and a low swing weight index. Other key features of the Easton Ghost X include:

Outside of the COMBAT MAXUM, the Mizuno Ghost may have the biggest barrel in baseball. But, that huge barrel does not come with the typically associated end loaded swing weight. Mizuno's Black Onyx Carbon material that is used during the construction of this series allows for a light swing weight, a stiff feel on contact, and hot out of the wrapper performance. Other key features of the Mizuno Ghost baseball bat include:

What do you think? Have you had the chance to swing one of these balanced bats? Which one is your favorite? Did we leave one off that you feel should be on this list of the best balanced bats? Feel free to leave a comment below letting us know your thoughts to start the conversation. Or, if you have any baseball bat or softball bat related questions, our Bat Experts are available via phone at 866-321-2287, email at experts@justbats.com, or you can click here to live chat. Don't forget, we're always here for you from click to hit!