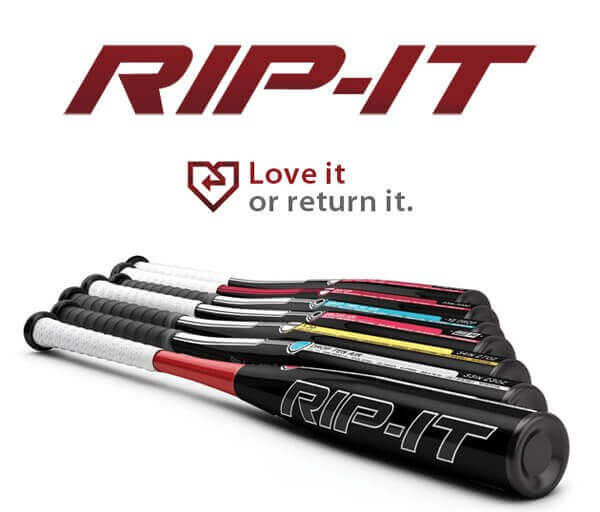 JustBats.com is excited to announce that the 2014 RIP-IT line is now available for baseball and slow pitch players.

The 2014 RIP-IT baseball line features a new Prototype BBCOR bat and the new AIR is available in BBCOR, as well as four different Senior League models. The AIR is also available in a USSSA slow pitch model.

There are a few upgrades to the 2014 RIP-IT lineup. First and foremost is the new R2 Alloy. The R2 Alloy is the strongest alloy that RIP-IT has ever used, making the AIR one of the most durable bats on the market. The 2014 line features RIP-IT’s exclusive Acoustic Barrel technology that lets the player know that they are hitting the sweet spot by the sound the bat makes.

The best news for players is that RIP-IT still has their Love It or Return It policy. That means that you’ve got 30 days to to make sure that your bat is the right fit for you. If you decide that you don’t like it, you can return it to RIP-IT for a full refund.

Check out the links below for information on the full line of 2014 RIP-IT bats. And remember, send us your game pictures or RIP-IT bat review videos for a chance to win a $25 or $300 JustBats gift card! Click HERE for details.

Chat Us
You can compare a maximum of four items.
Please remove one item to add another.
Add up to 4 items to compare.
Show Comparison
ERRR