Home Blog Behind the Scenes 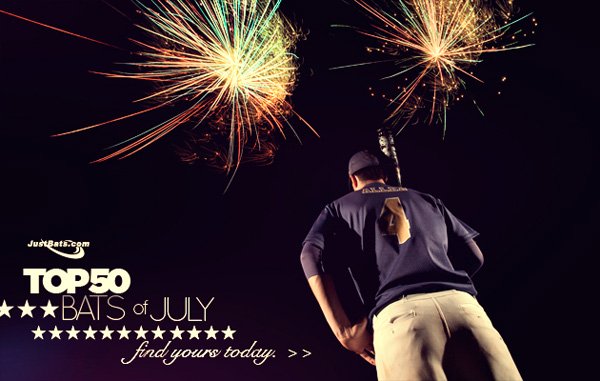 Mosquitoes were racing, trying to bite any exposed skin they could find in the hot, smoldering heat of a Missouri night in late June. The smell of sulfur was in the air, and large explosions could be heard across the countryside. We had become men, venturing into the wilderness, just to get the perfect shot. And for what reason? To sell as many bats as we could. As the creative/marketing team, we make a Top 50 email marketing campaign every month to display and sell all of the top bats of the month. It is a very successful campaign, and we like to get creative with it.

We brainstormed the perfect shot and hopped into Drew’s Honda that we packed full of explosives. We drove around at least 45 minutes before we found a long empty road for us to set up. After a few practice shots with Roman Candles, the sun finally went down and we were ready to shoot. We shot off the fireworks in the distance while our model was holding a 2012 DeMarini Voodoo. Between the strobes of light from Drew’s flash and the fireworks raining down, there was a masterpiece in the sky that we had captured. After a few hours of editing and designing, we had created a masterpiece on the screen. Check out this months top bats that are calling your name!

Filed Under: Behind the Scenes
You can compare a maximum of four items.
Please remove one item to add another.
Add up to 4 items to compare.
Compare (0 of 4) Show Comparison
ERRR