Home Blog Behind the Scenes

Monday Meet and Greet: Jeremy B. 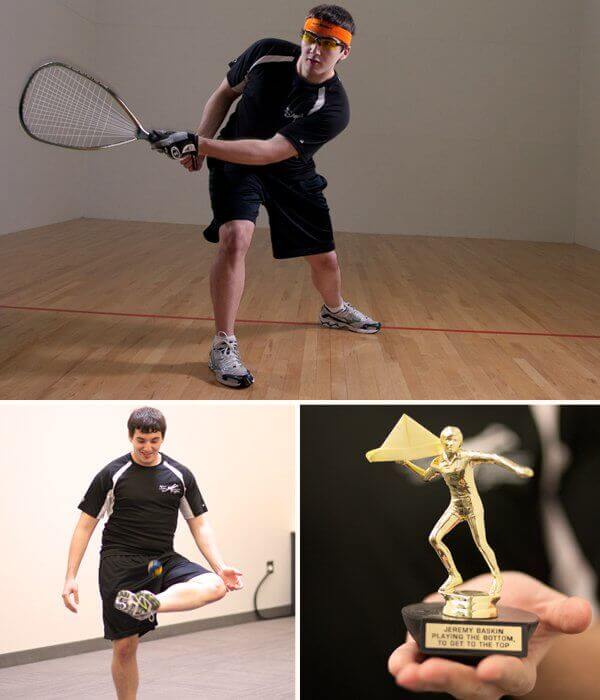 Every Monday we’d like you to meet someone new around here at JustBats.com. Get to know us a little better! Meet Jeremy! Jeremy is our Quality Assurance guy and trust us, nothing gets by him! Here is what makes Jeremy tick.

1. I hear you are a chocolate and candy lover, what's your favorite candy?
Reese's are at the top of the list; followed closely by Ferrero Rocher. Now there is one thing that beats them both, but it isn't a "candy". It's a jar full of delicious happiness known as Nutella!
2. You're pretty amazing at racquetball, mind sharing some secrets? What equipment do you use?
I'm not sure if I'd go so far as to say "amazing", but I think I'm above average! The only secrets I can think of would be to think about what shot you plan on taking, calm down, and practice. Practice practice practice. I use an E-Force racket that is 175 grams, some goggles that have vents in them, a sweat band, and ProKennex Pure 1 racquetball gloves. I don't pay a ton of attention to the brand of the stuff I use.
3. What has been your most competitive game so far in racquetball?
I've played a lot... so much that the games have really blended together. I can say that the most competitive day was a tournament that I went to a few months ago. I played six or seven competitive games that day, and by the end my legs just didn't want to support my weight. Standing was a chore.
4. Tell us a little bit about your job as Quality Assurance, it seems pretty interesting.
Whenever new features are rolled out to the websites, I get to look at them before they go live and give them the thumbs up or thumbs down. I review the changes in our most used browsers (Chrome, Firefox, Safari, IE9, IE8, IE7, and IE6). The position of QA is to be the last line of defense in keeping bugs from making it into production, and being the user's advocate. I'll sometimes review and proof e-mails before they get sent out which is dependent on if someone asks me to. I also help people with Google spreadsheets from time to time.
5. Can you share the story of how you started here at JustBats.com and then ended up where you are now?
Kevin Shillingsburg, a friend of mine, worked out at Picture Hills Fitness. I believe he met Scott and Mike T. there, and was able to get a job at JustBats.com. He asked if I wanted to apply there too and I said sure. Turns out I had delivered sandwiches to them before (when I worked at Mr. Goodcents) and Armando recognized me. That helped me get my foot in the door. I was eventually hired as a DC associate. I was in that position for about a year when Mike K. sent out an e-mail to the company about JustBats.com asking for opinions. I guess I was the only person that responded, and my reply had a decent bit of detail. I was then asked if I'd like to join the development team. The rest is history.
6. What do you enjoy doing outside of work?
Racquetball, eating sweets, and playing video games. It's my New Year's Resolution to get a higher gamer's score on Xbox than a friend of mine.
7. Any advice for people moving into your field?
You need to have attention to detail and you have to be okay with being repetitive. I'm often looking at the same thing on different browsers. I learned this after I started the QA position, but having knowledge in SQL will be useful for confirming that data is being entered correctly. Communication is pretty big too. If you find a bug, you want to be able to give steps on how to reproduce it so that the rest of the development team can fix it. That includes saying the basic steps on how to reproduce it, as well as which browser you were using at the time. Give as much detail as you can.
8. What's your favorite memory from working here at JustBats.com?
Armando going ragdoll. Back in the DC, Dave gave Armando a surprise belly bomb which leveled him. Armando went down like a doll... made of rags.
9. What's your favorite sport and team?
Watching sports is boring to me, so I don't. The only time I really watch sports is when Top 10 is on, so whatever team is on at that time would count as my favorite sports team.
10. Favorite movie?
I've seen a ton of movies, but right now I'd say that Oldboy is probably at the top. The new Sherlock Holmes movies that have come out recently are pretty sweet too.

Filed Under: Behind the Scenes
You can compare a maximum of four items.
Please remove one item to add another.
Add up to 4 items to compare.
Compare (0 of 4) Show Comparison
ERRR