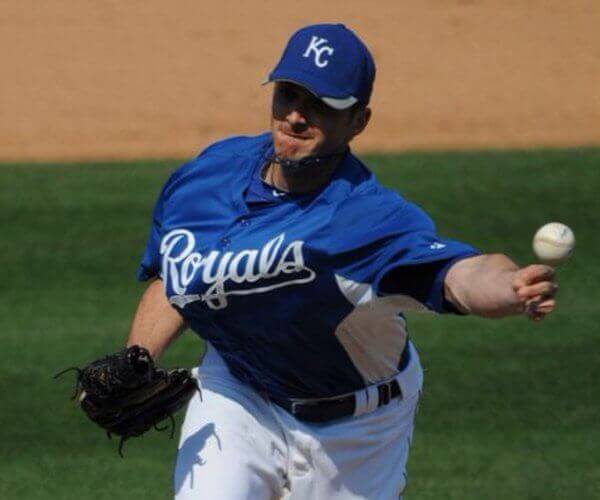 The JustBats.com family is pleased to announce that friend and former employee, Tommy Hottovy, has been traded to the Texas Rangers. Hottovy, a left-handed specialist, had been with the Kansas City Royals during the 2012 season and split time between the big-league club and triple-A affiliate, Omaha Storm Chasers. In nine games with the Royals, Hottovy had a 2.89 ERA with 6 strikeouts in 9.1 innings. With the Storm Chasers, he had 7 saves in 41 games and a 2.52 ERA while striking out 61 in 50 innings.

Hottovy worked at JustBats.com during the off season from 2005 to 2010. He was the head of Special Projects and is responsible for the Sport Court development. Though he’s had a successful baseball career, Hottovy has not forgotten his roots and remains good friends with the people that he worked closely with at JustBats.com and stops by to say hello whenever he’s in Kansas City.

Hottovy is a native of Kansas City, MO and a graduate of Park Hill South High School, where he was valedictorian for the Class of 2000. The opportunity to play close to home was too much to pass up, so Hottovy signed to play for baseball powerhouse Wichita State University, where he received a full-ride scholarship for his athletic and academic prowess. During his senior season at Wichita State, Hottovy was named first team All-Missouri Valley Conference after going 9-3 with a 2.25 ERA.

Hottovy was drafted by the Boston Red Sox in the 4th round of the 2004 Major League Baseball draft. He began his professional career as a starting pitcher with the Lowell Spinners in 2004. In 30.1 innings with Lowell he gave up three earned runs. In 2005, he was promoted to Class A+ Wilmington, where he had a 5.45 ERA and a 3-12 record in 23 starts.

Hottovy made his Major League debut with the Red Sox on June 3, 2011 against the Oakland Athletics, retiring the only man he faced.

Filed Under: Industry News
You can compare a maximum of four items.
Please remove one item to add another.
Add up to 4 items to compare.
Compare (0 of 4) Show Comparison
ERRR